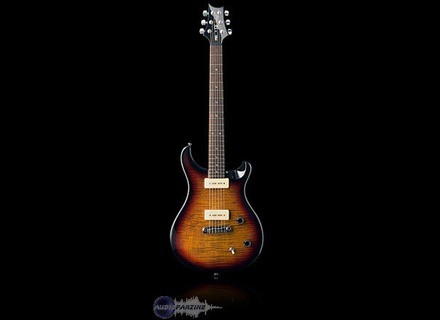 SE Soapbar II Maple, Other Shape Guitar from PRS in the SE series.

View other reviews for this product:
PRS is well known for their super high end guitars that tons of professionals swear by. They are made in America and cost tons of money. PRS is now trying to open up their market towards more every day players with their SE line of guitars. The PRS SE guitars are made overseas but built to the same specs as the American PRS guitars. The SE line of PRS guitars is like their Epiphone. This is the SE Soapbar model with the flamed maple top. There is a maple top but the top you can see is a veneer. This guitar has the dual cutaway prs body with the flat top. It is mahogany with a maple top. It has the traditional 25 inch PRS scale length on a 22 fret mahogany neck with a rosewood fretboard. It has PRS's wide fat neck and two PRS P90 style pickups. There is a master tone and master volume with a 3 way toggle switch that is unusually placed. The bridge is PRS's wrap around stop tail design which is pretty good.

Even though this guitar is made overseas it retains the great playability you associate with all PRS guitars. The PRS SE guitars overall are some of the best guitars being made overseas. It has PRS's traditional Wide-Fat neck which isnt as scary as it sounds. The Wide-Fat neck isnt that fat. It is not like 50s Gibson fat. It is more of a normal profile compared to the wide-thin neck they put on some guitars. The fretwork is nice and even and the factory action is very good. The wrap around bridge is a great setup and matches well with the 25 inch scale. PRS guitars always seem to have better intonation than other guitars even with their seemingly simple bridge setups. On many guitars with bridges like this the intonation is bad but PRS has figured out how to design their bridges to where the design is simple but the intonation is correct. gain with all these PRS models I hate how far away the pickup selector is. I wish they would put them closer to the rest of the controls.

The P90 pickups in this guitar really give it a classic crunchy sound. I love the type of vintage tone P90s deliver. They have the twang of a single coil but with nice body so they dont sound thin and shrill. Its like the perfect middle way between a humbucker and a Fender style single coil. P90s are more versatile than people give them credit for. They can clean up and give the twang but you can also get really dirty with them and they dont sound harsh. The nice low end the pickups deliver give you a nice thick tone overall. You can really rock out on the bridge pickup. The P90 gives you great grit and bite for classic rock tones. The neck is also nice as well. It cleans up well and can get you a nice jazz tone along with the gritty P90 sound.

These PRS SE guitars are great and everyone can afford them. They are some of the best import guitars being produced. This guitar with its P90s is a nice alternative to the normal humbucker or single coil guitars. If you are a single coil fan or a humbucker fan and are looking for something different a P90 is a great alternative. Even though it is a single coil it still has a lot of humbucker qualities that will open up new areas for you in your tone. With the PRS SE line you no longer have to pay thousands for PRS quality you can get this guitar for the price you might pay for an Epiphone.
Did you find this review helpful?yesno
Cookies help us improve performance, enhance user experience and deliver our services. By using our services, you agree to our use of cookies. Find out more.