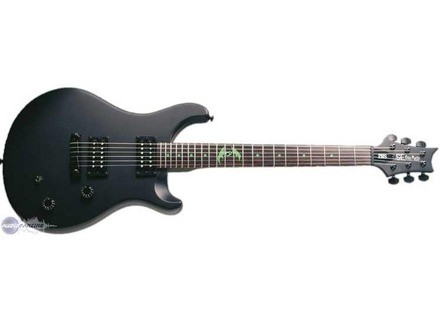 SE Billy Martin, Other Shape Guitar from PRS in the SE Signature series.

View other reviews for this product:
This is the PRS SE signature guitar for the guitarist in the band Good Charlotte. I am not familiar with the band but I guess they are popular enough for their guitar player to get a PRS signature. PRS is a high end guitar maker known for their super expensive guitars made for professionals and collectors. They recently started to try and change this image with their SE line. The SE line of guitars is a line of PRS guitars that are made overseas to much of the same specs. Its kind of like their version of Epiphone. It was smart of them to make this guitar in the SE line because I bet most fans of this guy and his band would not be able to afford a full USA made PRS. With this guitar you get a mahogany body with a set mahogany neck. The neck has a 22 fret rosewood fretboard. The inlays are an ugly green color with a bat at the 12th fret instead of a bird or a dot. The whole guitar has a matte black finish which is very smooth. You get PRS tuners up top and a PRS wraparound bridge. PRS has refined their wraparound bridge for many years so it is usable now. The pickups are dual humbucking PRS SE pickups. The controls are simple with a volume and tone with a 3 way switch.

There arent any real playability differences between this and a normal PRS SE, but this is good because the normal model already plays great. It has PRS's wide-thin neck profile which feels a lot like a 60s Gibson profile. The wrap around bridge is a great setup and matches well with the 25 inch scale. PRS guitars always seem to have better intonation than other guitars even with their seemingly simple bridge setups. On many guitars with bridges like this the intonation is bad but PRS has figured out how to design their bridges to where the design is simple but the intonation is correct. The setneck joint is nice and slim so you can play all the way up on the neck. The satin finish gives a smooth feel which is good on the neck. Again with all these PRS models I hate how far away the pickup selector is. I wish they would put them closer to the rest of the controls.

This guitar sounds no different than any other PRS SE with normal PRS SE pickups. This is turning out to be a pretty lame signature guitar overall. The pickups are decently hot and clear. The pickups PRS puts in these import guitars are better than most stock import pickups but they are still not on par with good aftermarket pickups. The neck pickups has a pretty smooth sound but does get muddy if you use a lot of gain or drive. The bridge pickup has a clear and open sound. You can get a real singing sound if you play leads on the bridge position.

This isnt the way to do a signature guitar. This guitar was pretty close to being cool. A PRS SE with a matte black finish would have been cool. But they had to go and add the stupid green inlays. If I was the guitar designer and Billy Martin told me to put green inlays on the guitar I would have slapped him. They probably lost a ton of sales just because of them. But that is the only thing that makes it a signature guitar I guess. They could have just made a black PRS SE and not put his name on it. I am sure it would have sold a lot more than this signature. If you are a Billy Martin fan by all means buy it. If you are just looking for a good solid PRS SE get a normal one there is nothing special here to be found other than green inlays.
Did you find this review helpful?yesno
Cookies help us improve performance, enhance user experience and deliver our services. By using our services, you agree to our use of cookies. Find out more.