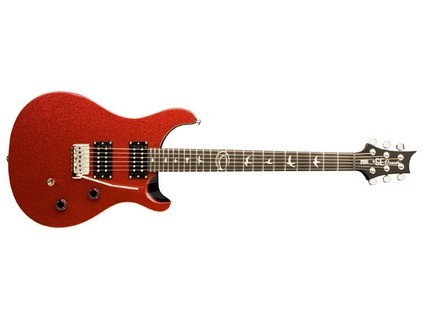 Orianthi is a popular Australian guitar player. She was inspired to play PRS guitars after seeing Carlos Santana. This is her signature guitar from PRS. Like many PRS signature guitars this is an SE model. They like to make their signature guitars SE models so more people and fans of the artist can afford them more easily. This guitar is basically a PRS SE Custom 24 with special inlays and a sparkly finish. This guitar has a Korina body with a maple top. The top on this guitar is flat unlike the USA made PRS models that come with an arch top. The guitar has 24 frets over the traditional PRS 25 inch scale. The neck itself is made out of maple and has the Wide Thin or Pattern Thin neck profile. The 12th fret has a special Orianthi logo inlay.

These guitars play very well for their price range. The 25 inch scale is very comfortable and gives you a good feeling that is right in the middle of a Fender and a Gibson. The wide thin neck is very comfortable as well. It isnt like an Ibanez neck but it has a nice modern feel to it. The radius is pretty flat and it is wide so it gives you lots of room to move around. A common trait on these PRS models that I do not like is the pickup selector placement. I with they would put it closer in with the rest of the controls.

The PRS SE pickups are cool all around pickups. They can do a decent crunch and they clean up well. People like the guys in Opeth use the stock PRS SE pickups in their guitars because they work well for all the different types of music they play. They are very smooth which you do not see much in pickups anymore. They have the smoothness but it doesnt come at the cost of clarity. Some pickups are super smooth but are also super muddy. These pickups are smooth and clear which is quite an accomplishment.

You can tell this is a girls guitar. You do not see many sparkly finished guitars these days. I think if you had a daughter or something who wanted to get into guitars and you wanted to get them a decent guitar after a couple years I bet they would like this guitar. Looks aside this is another solid PRS SE guitar. For the money these are some of the best all around guitars you can buy. Being made overseas does not automatically make a guitar bad. In this case you get a quality guitar from a maker who wouldnt sully their reputation by putting out garbage.
Did you find this review helpful?yesno