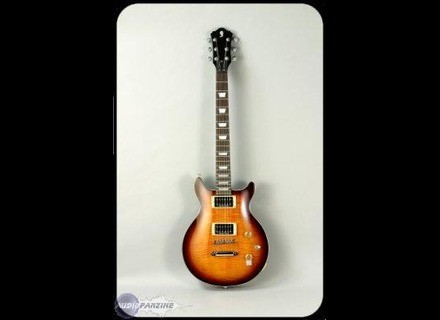 Finwhale, Other Shape Guitar from Whale.

View other reviews for this product:
Everything has already been said below ... Need I say more ??? This is a very very very good scraper manufactured. The violin is superb. In addition she is super nice, I've amber degradé ...

The handle is it nice ??? What question !!! For me, this is the dream: quite narrow, moderately fine, a little round ... The solos are all alone, even up to the 20th box! The access to the treble is very good I think. Seated, it's true that it tends to lean towards the body but nothing nasty. on the other hand, on stage (thus standing) is a pure regal! The playability is ... For sound see below.

It is perfect for my style of playing: I play prog rock as well as blues, through the varietoch ... the sound is always good. FYI, I play on Peavey Pro 112 Transtube Studi.

- The SH4 has a nervous sound, perfect for solos satu or for very clear sound
slammin. The armoniques: wants you in voila ...

- The SH2 has a jazz sound but sounds good royally gentle distortion. The clean sounds are
extras.

- The intermediate position is perfect for chard and wicked rhythms, but I do not use it too much. on the other hand, in split, clean sounds are very good style Marillion ...

It really felt she trunk including saturation, we feel that there is the pattate!
Note that splits are very interresting and effective, I used a lot.
FINALLY THE PLOW WITH A SUPERB SOUND !!!!!!!!!!

Frankly, for 519 euros total music, she is worth more than much !!! She would be 300 more I would not be etonné not at all !!! If you find Cygnus like me, go ... And those who say that whale is not a good brand: test and come in several tell me !! Lol
9/02/09: Bon ben frankly ... it's the ball !!! She has great Viellie even if it makes only 2 and a half years that I have. Really she won in heat and dynamic! All guitarists who hear do not know the brand and eventually e-pa-tees !!! FYI I have a friend who had a Gibson Les Paul studio, and after several hours of ben comparisons there is no comparison between the two !! So much so that my friend sold its gibson to buy one ... I would not trade that against a Fame Forum III, because I'm a fan of the PRS look ... it's the only one that would make me crack (with much of the original)!
Damn I was playing with the old stuff before (peavey studio pro 112) !! Abused ... good amp anyway.
So I advise very very very very (...) has strongly anyone seeking a skyscraper has exellent very modest price given the general quality of the beast and his equipment !!

byyyyyy
See the source
Did you find this review helpful?yesno
Cookies help us improve performance, enhance user experience and deliver our services. By using our services, you agree to our use of cookies. Find out more.