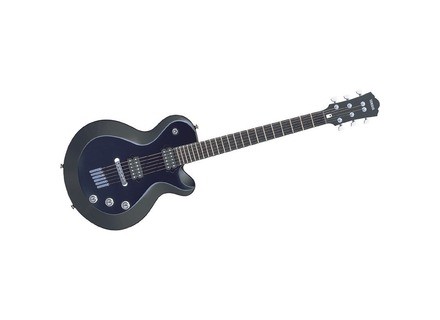 AES820, Other Shape Guitar from Yamaha in the AES series.

View other reviews for this product:
Piano black, perfect finish, retrocool with high-tec features. Not just a guitar but an instrument!
I've played blues to metal for the past 23 years and with this guitar you can pretty much get 'em all. I play through a 5150 signature. No effects.

I first played this guitar in my local guitar shop in about 2002. It was a D-6 but I wanted a normal scaling. That day I bought a Fenix Telecaster (pre-lawsuit, see reviews on Harmony Central). Still have it and beats most Fenders. However through the years the AES820 linguered in my mind and in 2006 I bought one new from a music shop through mailorder. I played it for about 2 months and then I had to sell it because I really needed the money. I sold it to a guy who wanted to learn how to play. The moment I put it on the mail I knew I was going to be sorry. And I was! For the next two years I frequently searched the internet for another but NEVER encountered one. Until december '08. I looked for Sperzel tuners to put on my Fenix and there it was...the same AES820 I sold to this guy. I immediately put a bid out and emailed him that I was the guy who sold him the guitar 2 years before. He accepted and I finally had my AES820 back. I will never sell it again, in fact, I'm going to try to buy more!!

Looks good, plays good, sounds good. Like I said, it's an instrument. Everthing is well thought-through and well built. My experience over the years is that, no matter what Yamaha makes, (from mopeds to saxophones), they make well. This guitar is even above that.

Just play it and find out why it's so great.

So happy to have it back. Can't stop playing it.