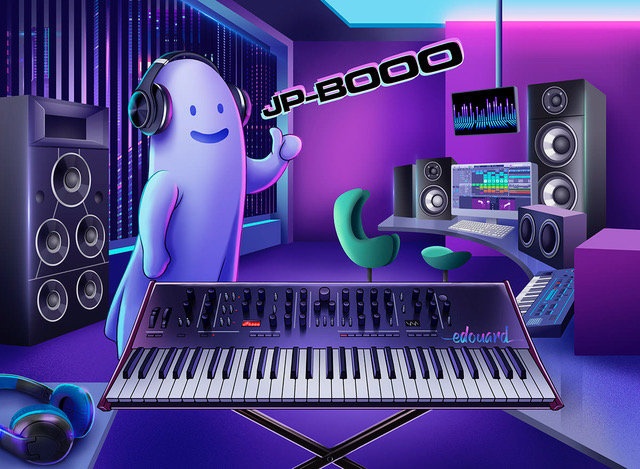 Other CD & Sound Bank from Edouard .

Publié le 03/28/21 à 12:18
Value For Money : Excellent
Audience: Anyone
I loaded a number of user oscillators into my Minilogue XD Module because I wanted to explore different sounds, and in particular I wanted to find a good Supersaw which will give me those huge nineties pad and hook sounds.

There are several different oscillators that I've tried to the above end and although they were good, nothing really cut it for me. Yes, lovely tones, but just not quite 'there'. That was until someone on a Facebook synth group pointed me in the direction of Edouard Digital.

If you look him up, you'll find Edouard has re-created the original Supersaw of the Roland JP-8000 very carefully, and calls it the JP-BOOO. He actually bought an old JP-8000 just so he could analyze the sound and get his emulation exactly right, and I think that kind of effort and attention to detail deserves some kudos.

First of all let me say that I think it's worth the money. We're perhaps not used to paying 29Euros (about $43 Canadian) for our user oscillators but considering that this is a one-time purchase you can excuse it to yourself just like I did.

Besides, it very much turned out to be a gift that keeps on giving.

Why do I say that? Because the JP-BOOO user oscillator does exactly what it claims, and does it REALLY well. I have an Access Virus TI2 with its well-known 'Hypersaw' oscillator, and I have to say that the JP-BOOO treads all over it. The sound is amazing, inspiring me to create all sorts of 'spacey' chord changes so I can enjoy the hugeness. Yeah the MXD is only four note poly, but the first thing I recorded using the JP-BOOO I split into several duophonic parts and printed them separately. WOW! The end result blew me away. Huge chords with huge tones, gut-throbbing bass and all the fulsome synthy goodness I could want.

The only thing I'd advise potential users is to update their firmware. The PC <--> Korg software threw a wobbler every time I tried to load it *until* I updated the firmware. After that, no problemo; everything worked as it should. And I need to learn to read the documentation more carefully.

The pressure of time means I must cut this review shorter than I'd like but I'll summarize by saying that the JP-BOOO user oscillator is *definitely* money well spent. If I need a source of inspiration I can just bring up the MXD and I know I'll be in audio ecstasy soon. This is without doubt the best user oscillator I've found so far and I have no hesitation in saying HIGHLY RECOMMENDED.