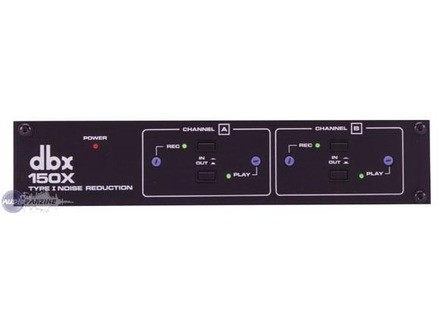 150X, Other Studio Effect from dbx.

View other reviews for this product:
This device is a reduction of breath 2 channels 1 / 2 rack width rack using either a second unit is a fixation. It uses the standard reduction dbx Type I breath. This means that it is intended to be used with a tape recorder. For cassette tapes, some radio transmissions or certain vinyl dbx encoded, you should use the standard dbx type II. So it should be used in this case his counterpart dbx 140x.

Obviously, like any system to reduce breath is a fully analog device. Like his counterpart 140x, there is no possibility of editing or presets but that&#39;s normal because the dbx is a standard reduction of breath. The only possibilities are setting the input sensitivity, output level and the ability to switch on the system is reduced or not (bypass). And all this is individually adjustable for each channel, which is already much because most of its competitors do not allow you to set only the power is switched off or reduced breath ^_________^ It also has a connection with TRS balanced

)))) But the distance between each connector is really calculated to the nearest millimeter, there is no incentive to use jacks with a diameter too large or risk of distorting the axis the connector and hence the damage, damage. Especially the mandatory eight wire the connectors to use it.

As soon as we know this principle, the rest is a breeze, no need to have the user manual to use it ^________________^ And once set, it is a device that does not touch except of course if we have to put in bypass or not, depending on whether you wish to encode or not a tape (or tape, depending on the model used) dbx or band that wants to listen is dbx encoded or not .

It is true that dbx has been a true revolution for audio cassettes (dbx type II) but for a tape recorder (dbx Type I) especially if it turns into 38 cm / s, it is not absolutely necessary . Unless the system is used on a multi-because I guess the more the breath adds more tracks but I have no experience. Moreover, while some tape recorders two tracks 9.5 and 19 cm / s are fitted (or are equipped with a Dolby), I&#39;ve never seen a machine stereo 19 and 38 cm / s with a dbx or an integrated Dolby. Especially as the dbx Type I produces a slight pumping effect to certain instruments in the reproduction of the band. For cassettes, the dbx type II also produces this phenomenon but it is less audible than Dolby C, but for the bands, it is best to use the Dolby SR rather than the dbx Type I if it is not willing to pumping phenomenon. As far as we can afford, of course, as a Dolby SR costs a fortune even used - if you can find one, which is already difficult - whereas here, a dbx type I is infinitely cheaper.

It is also important to note that different standards to reduce breath (dbx Type I, Dolby A, Dolby SR, etc.) are not compatible. Do not try to decode a Dolby tape with a dbx or vice versa as in this case, I tried: the sound reproduction is catastrophic. Do not try to apply dbx decoding on a tape that is not encoded because there also is a disaster. Therefore choose to reduce your standard breath after your application and especially with whom you are following the exchange of audio files. The dbx Type I is typically used by semi-professionals and in-home studio (with tape recorders Tascam notament). Bands for use in a professional environment, it is especially the Dolby A was widespread. Dolby SR, although higher than the Dolby A, is less common since it was released in 1986, that is to say, a few years, along with the very first digital systems. When the dbx type II (simplified version of the dbx Type I), Dolby B (simplified version of the Dolby A), Dolby C, Dolby S (simplified versions of Dolby SR), these are mainly restricted to standard cassette tapes. There are also other standards: High () Com and Telecom C4 notament but these are rather marginal and not very widespread.

I use it for a few months with my tape recorder Otari MX-5050BQII and it works flawless ^_____________^ Besides pumping phenomenon but that&#39;s not a fault of the device is suitable for standard dbx, either type I or type II, unfortunately ...

Ability to set input levels, output and setting off the system or dbx channel

Jacks connectors very close to one another, is limited

Has no On / Off button, so we must plug in its decision-run strip on a bench with a switch of attention as with the tape recorder, for example.

</ul>
Yes, if I buy a dbx, I will redeem what model (or 140x if it is for a cassette tape) without hesitation.

External devices to reduce wind disappeared from the market with Analogue and today almost all cassette recorder features Dolby B at least integrated. But we can still sometimes find occasion.
See the source
Did you find this review helpful?yesno
Cookies help us improve performance, enhance user experience and deliver our services. By using our services, you agree to our use of cookies. Find out more.