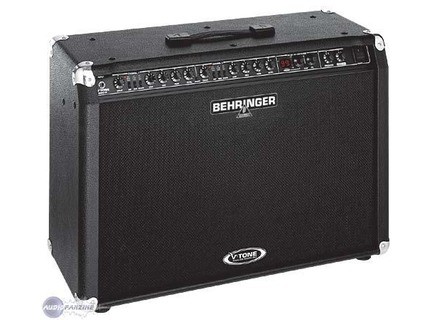 Value For Money : Poor Audience: Anyone
View other reviews for this product:
had this for some time and it wasn't until yesterday tht I learned I was suppose to get a footswitch with it and didn't, attempted to find a source to purchase one from behringer only to be told they don't come with the footswitch now, and the footswitch is discontinued so I asked for a schem to see if I could use a different vendors switch and was told no because I am not a certified repair partener. this would have been the end of it except the behringer employee got snotty when asking why I waited 2 years and as I had already told him I wasn't even aware it was suppose to have came with one till I looked at the manual yesterday. i have repaired this amp myself a total of 8 times since buying it new because right after the warranty expired it started failing, well last night i went ahead and cracked her open to do a complete and thorough inspection and find a whole slew of problems ranging from missing 100pf capacitors on the footswitch board to a blob of solder UNDER a couple of the electrolytic caps ( which i have never replaced).

in a nutshell the quality is substandard as is the apparent lack of QC at the factory, after removing the solder from under the caps ( and by under i mean on top of circuit board underneath the caps NOT the solder pads)it satrated to work better than it ever has, i also bought a footswitch today from a local pawn shop for 10.00 and the switch doesn't work on the amp but causes the channel selection and effects to go wonky and not work when plugged in. after spending all day looking i found the old randall footswitch is correctly wired, functioning and SHOULD work with the GMX212, however there are 2 x 100pf surface mount caps shown on the schematic which locates them on the tiny circuit board where the footswitch plugs in yet the actual tiny circuit board is MISSING these 2 caps, so i ordered them in hopes that it fixes the footswitch.

to be honest i would advise against this amp or any other behringer product based on poor customer service ( actually lack thereof) and look for something else.

while at it avoid anything from any sister companies or close partners of behringer to include Bugerra. there are far better amps with better quality than this one.
Did you find this review helpful?yesno
Cookies help us improve performance, enhance user experience and deliver our services. By using our services, you agree to our use of cookies. Find out more.