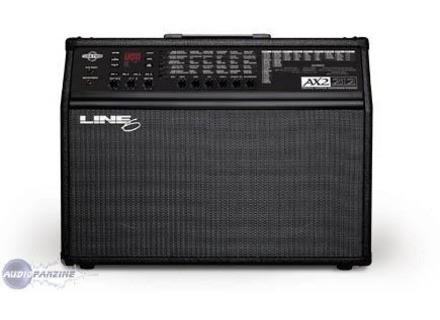 View other reviews for this product:
This amp was purchased at Music World in Hopkinsville, Ky. about two and a half years ago. The owner is a friend of mine and we made I traded a G&L SC-3 Electric Guitar & $500 for the AX2 and the Foot control board. All tolled I payed about $1025.00. I purchased it for stage use with my band Renegade!

What I like best is the various array of amp models you can attain just from a touch of the foot control board. Second, is the ease of use after going over the owners manual a couple of times. It appears more complicated than it really is. Next is the foot controller which has two pedals and the controls you need to shift gears on the fly without fumbling with the amplifier itself! The right pedal allows me to control my volume with ease, and the second pedal allows me to add a wah to any patch that I am in. No additional power cord need for the foot board. It runs off a phone-like cable. This amp also allows you to choose amp and cabinet combos. You can take a Marshall 100watt head and set it on a 2x12 cabinet, or a 60watt Fender and stack it on a 4x12 cabinet! The coolest thing that this amp does(at least to me!) is you can make it sound as though the speakers are flared in or out, as if you grabbed the speakers and pushed or pulled on them! Very cool!

It's a heavy son-of-a-gun! I put casters on it to make it easier to move around. Saving new patches is sometimes a trick if you're not paying attention to what you're doing. You can lose your work without even realizing what hit you. Amp cover should be part of the deal!

Very sturdy and well built! I purchased the optional cover to protect my investment.

It's a fantastic amp and very versatile. My band plays everything from old country to Metallica and it has the sounds to support whatever genre of music we're playing.