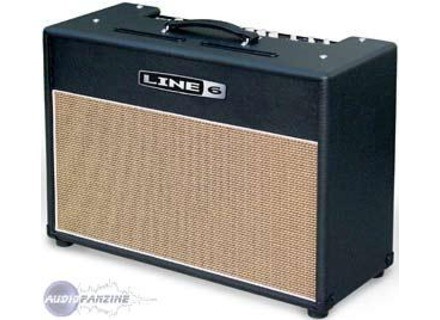 View other reviews for this product:
This is a 150W combo (from January 2004, line 6 has proposed that the Flextone III passes 2x75W) to modeling. The amp section is solid state, it can connect directly via XLR connectors and emulate the sound "classic" of a microphone. The Flextone III also offers MIDI, which include the ability to update the software of the amp, download www.line.com presets on the site, to access all the settings of the amp, the easier storage banks (you will understand ... I think the MIDI card is required! again, a 2x2 card USB costs only forty dollars!). Too bad there&#39;s no USB port or card reader (SD, ...) to exchange its presets quickly (yes, the other guitarist has the same amp as me!). I can be demanding but I admit that the amp and comprehensive:
- More than thirty amps (including a range of Marshall, Soldano a 100, my favorite, a Blackface TERRIBLE, a Hiwatt you tell me the news ... well, it&#39;s really tip-top! ) - just make sure you have the same software version 1.1
- 16 firms (combinations amps / cabinets multiply the possibilities for the amp!)
- Effects including chorus, PHSA, tremolo, rotary ...
- By the time you want, here!
- Many reverbs accessible via the MIDI connection (yet another reason!)

The use of the amplifier turns out to be extremely simple, the ultimate resistant to new technology makes her! The number of settings on the control panel is quite limited but we quickly find the sound you are looking. The sound is just wonderful, rich bass, deep ... a treat!
Again, I recommend using the MIDI settings for more if only for position effects in the loop! The English manual provides the characteristics of the amps but only your ears will guide your choices in the use of amplifiers. The 2 HP Celestion and stereo can get a huge projection that rivals the tube amps ... even with some stacks (I was surprised to see that both the Flextone heard about my peavey stack all tubes !). However, there is a small criticism I could make it, equalization must be reviewed for each noise level, let me explain: we have a transistor output stage, the more they are asked, the answer seems more rich high frequency, which is not the case with tube amps! However, the 150w Flextone remain usable on all along the path of the volume button.

Question tone, the amp turns out to be very versatile. It is perfect for my style of play My influences are vast, they range from Django Reinard to the most extreme metal like Dying Fetus. My favorite style is the Guitar Shred Rondat excels where Patrick and the gentlemen Satriani, Malmsteen, Laiho (Children of Bodom group). The problem that arose before is that generally, the right channel amplifier with a saturated often have clear sounds steep to steep! Here, imagine you playing a thoroughly Soldano 100 barges and a second later, you go to one of his warm Blackface. It&#39;s terrible my friends! However, another minor complaint: it is a processor that turns your sound, the response of the amp it is felt by a lack of momentum. Rest assured it can be done fairly quickly and the little we have a good scratch, it goes without problem (I have a Peavey Wolfgang, a Les Paul with Seymour and Jackson with EMG active).

Today, I use the Flextone for 1 year and I intend to separate me from my stack, since beyond the problem of congestion / transport, it became too typed for me and its use becomes more Exclusive! I&#39;ve been playing now for 13 years and I must say that it&#39;s weird to see how I was especially excited about the gear I was a fan of any lamp!
Before buying this model I tried a lot of amps including VOX / Korg AVC 120 (something like that) which is less boilerplate and encountered serious problems of reliability. There was a Johnson not bad but a bit expensive for my taste, one that takes more Berhinger Playskool toy than a guitar amp ... and the line 6 Vetta II! that&#39;s the ball but then left to another product line and budget is not the same!
So, I chose the Flextone III for its compactness, its power, its sounds and one side while allowing movement without having to carry around a bunch of pedals and cables!
Personally, I love this amp too, I struggled to get used to at first, but when I understood all the subtleties of the beast, I can not do without. In addition, issue price is really affordable since Line 6 has lowered its prices in 2004, the Flextone III XL is around € 750. So what are you waiting to try and get an opinion?
See the source
Did you find this review helpful?yesno
Cookies help us improve performance, enhance user experience and deliver our services. By using our services, you agree to our use of cookies. Find out more.