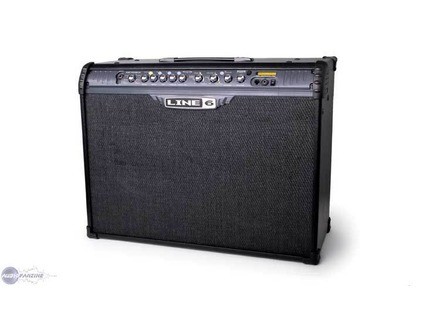 View other reviews for this product:
This little amp is nice priced and convenient amp. Much like the 75 watts it retains most of the features from the original amp modeling amps that line 6 starting making years ago. Now they have updated it to the modern times and it sounds not have bad. The tones of this amp I like a little better than the original Spider amps that I was previously used too. Line 6 has upped their tones in these new amp models with better tonal response.

Spider II 15 packs six Smart Control FX including, Phaser, Chorus/Flanger, Tremolo, Sweep Echo, Tape Echo, and Reverb. All effects can be easily tweaked and delay times can be adjusted using tap tempo. Pretty much the same as the spider 2 only with a couple more options and basically the exact same tone.


I have always had a problem with amp modeling since they don't sound anything like a real amp. Don't get me wrong this unit will not sound like a real amp. But ti will get you in the ballpark of how they should sound. This amp is not designer to rival real tube amps but give a learner or beginner a great start at learning the electric guitar.


This amp is not longer in production and has been updated in a newer model. You can find it on the used market for under $299. This amp is marketed a the beginning guitar player who needs an amp with a load of effects and options. I wouldn't recommend this to anyone trying to start a band or responding to a craiglist ad looking for a guitar player with a lot of sounds. So for the learner player this would be fine.
Did you find this review helpful?yesno
Cookies help us improve performance, enhance user experience and deliver our services. By using our services, you agree to our use of cookies. Find out more.