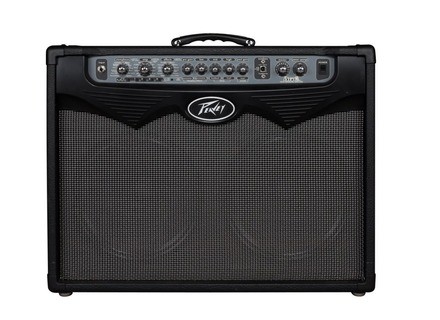 View other reviews for this product:
The Peavey Vypyr 100 is the largest solids state amp in the recent line of Vypyr amps. It is packed chalk FULL of cool features that kids today are ridiculously lucky to have in a $450 amp. It features 11 amp models with 2 channels each, several different effects spread out over 2 different effects blocks, a separate delay and reverb section, and the ability to dial in tones from Fender clean to Diezel or Mesa grind all at the twist of a few knobs. It's a solid state 100 watt amp with TWO 12 inch speakers, and two extra 1/8" jacks, one for aux. in, and the other for headphone. There's also a power sponge control which acts like an attenuator of sorts to bring down the volume and brown out the feel of the amp.

This amp can be daunting to look at and perhaps even dial in on the first few attempts, but fear not! Peavey has it set up much like a standard amp/effects setup, with your stompbox sounds first (boost, phaser, flanger) preamp tones (amp models) next, then your other effects (such as pitch shifting and other "rackmount" type processor effects. Next there is tweaking the power amp settings (EQ controls like bass, middle and treble) and then finally the amp has a master volume to control the output of your new preset. It's pretty easy to get the hang of and it does such a wide variety of tones that it's perfect for the jamming musician who needs a variety of different tones.

This amp is great for many different sounds from clean to high gain. While it lacks the general tube feel of the high dollar amps it's emulating, I really can't expect much better tone out of a $450 solid state amp. It covers a wide variety of different tones and sounds great at all them. Some of the high gain sounds a bit compressed for my liking but for a beginner I'm sure it is just cool to have so many flavours of distortion tone available, plus all the cool effects built right in. I really like some of the low to mid gain sounds like the AC30 and Badcat with the gain turned right up as it gives a more natural tube like sound than the higher gain Mesa/Diezel/Krank models do. This is especially true of the smaller 15w and 30w version with their tiny little speakers, but I'd say it's true of the whole series, even the tube ones. This one is a bit better with its 2 speakers but it still has some of the modelling compression that I'm not a fan of as much. For what it is though... great.

All in all I think the Peavey Vypyr 100 is a FANTASTIC bargain for the $450 new that they cost. It's really quite mind boggling to think that such a decently priced practice/jamming amp can sound this good with a wide variety of sound emulators. It is definitely my go-to recommendation for a great jamming and home practice amp as there is simple no better bang for your buck than the Peavey Vypyr series.
Did you find this review helpful?yesno
Cookies help us improve performance, enhance user experience and deliver our services. By using our services, you agree to our use of cookies. Find out more.