About one year ago Fender released the small modeling guitar combo Mustang II. Ever since, they have extended their product line with more powerful products, including an amp head we want to try out now...

With the G-Dec and Mustang series, Fender is trying to refresh its range of affordable amplifiers. Besides using modeling technology, these products can be connected directly to a computer in order for the user to set up and share presets. and also to use the amp as a digital audio interface for direct recording into their favorite sequencer.

The Mustang family includes two groups of products: the small Mustang I and II on the one hand, and the more powerful and bulky Mustang III, IV and V on the other. The last three work the same way as the small combos and provide more advanced features. The only difference between the three products is the speaker setup and the output power. The Mustang III is a 100-watt combo equipped with one 12" Celestion G12T-100 speaker, while the Mustang IV is a 2×75-watt stereo combo including two 12" Celestion G12P-80 speakers. Finally, the Mustang V we want to try out today is a stereo amp head providing 2×75 watts of output power that can be connected to a stereo 4×12 speaker cabinet.

After unpacking we discovered a nice looking “brick” weighting 27 lbs. with the following dimensions: 10.25" × 26.5" × 10.5"… In short, a standard amp head! The finish looks nice and the product seems to be robust. Its looks are very nice and vintage-like, in contrast with the much more modern inside of the amp. The “witch hat” style knobs, “carbon tweed” vinyl covering and silver grill cloth look very nice. The finish of this quite affordable amp ($600 for both the head and the speaker cabinet) is at the same level as much more expensive products (also in Fender’s range). So, it’s a good start!

A small but important detail: the controls, switches and display are on the top side of the amp head. Short persons (OK, very short persons) could have difficulties accessing them when the head is on top of a 4×12 speaker cabinet. Since I’m very tall, I had no problems!

Let’s start with the connectors on the rear panel. You’ll find a pair of 1/4" jacks for the stereo speaker cabinet, or any other guitar speaker for that matter. The output power of each channel is 75 watts at a minimum impedance of 8 ohms. You’ll also find two connectors for 2 or 4-button footswitches. Do note that a 4-button footswitch comes with the amp. It allows the user to select a bank or a preset, and to bypass the effects and the tuner. Hats off for this very robust and comprehensive footswitch that even has a small display. You have the possibility of connecting two footswitches simultaneously (the 4-button footswitch plus a 2-button version) so you get six footswitches in all: not bad for tap-dancing guitar players. The rear panel also offers a stereo FX loop on 1/4" jacks. 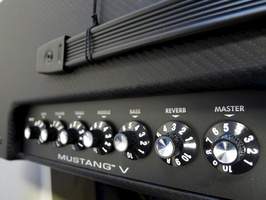 The top panel hosts all the controls and the guitar input. The witch-hat knobs are the amp modeling controls: gain, volume, treble, middle, bass, reverb, and master. Note that only the master volume setting is not stored in the presets, which is a good thing: just balance the volume of your presets and set the master volume for all of them depending on the application (rehearsal room, bedroom, etc.). The modeling settings are quite intuitive: just turn a control and the corresponding value appears on the display on the right. The display allows you to see all settings of the amp in the twinkling of an eye, but also the effects, etc. However, notice that the controls are not endless encoders so huge value leaps can happen. For example, when the volume control is physically set to 8 while the value stored in the preset is 3, turning the control will change the volume value from 3 to 8 very abruptly. Watch out for your ears! 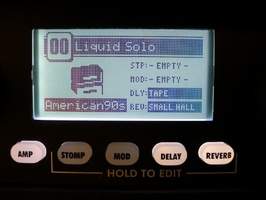 Beneath the display you’ll find five backlit buttons: “Amp” displays the values of the amp modeling (the parameters are split on two pages you can access pushing the button once or twice); “Stomp” to activate and select the virtual stompbox inserted before the amp (fuzz, overdrive, wah-wah, compressor, etc.); “Mod” for post-preamp modulation effects (chorus, flanger, tremolo, etc.), “Delay, ” and “Reverb”. If you press any button shortly you activate/deactivate the corresponding effect; if you keep it pressed you access the edit pages. Editing is easy with the big endless encoder located to the right of the display. Turn the encoder to browse the effects and press it to select the desired effect, accessing immediately all parameters… It’s not the most convenient way but it works fine (I would rather have five small encoders beneath the display or even a touch-screen!).

Also notice that you can see the signal path pressing the encoder twice, but you’ll have to use the Fuse software if you want to change the order of the stompboxes and effects… 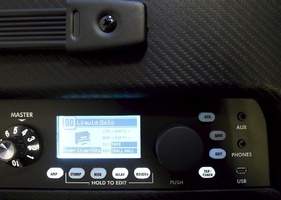 On the right of the encoder you’ll find four additional backlit buttons: “Util” gives you access to the amp parameters (LCD contrast, etc.) and allows you to Quick Access the three presets. The “Save” button allows you to store your settings, “Exit” brings you back to the main page where the model and the active effects are displayed, and the “Tap/Tuner” button allows you to adjust the tempo and activate the perfectly working integrated tuner.

The top panel also provides additional connections: an Aux minijack input for a CD/MP3 player so you can play along with your favorite recordings. A Phones jack that allows you to play without disturbing your family or neighbors (fed up of listening to the “Heartbreaker” solo with every second note detuned). The speaker is automatically muted when the headphones are connected. Last but not least, the USB port allows the amp to communicate with the Fender Fuse software and your audio sequencer.

A lot of nice features, but what about the sound? 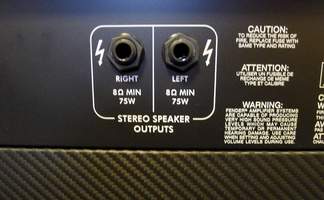 The clean models really convinced us! Fender surely knows how to model Fender amps! The amp models provided are quite complementary, from very round to very bright: '57 Champ, '57 Deluxe, '65 Deluxe Reverb, '59 Bassman, and '65 Twin Reverb. With the neck pickup of the 335, all models show their personality and provide a wide range of sound colors. The same applies to the '65 Princeton we tried out with our Stratocaster: the sound is well balanced, powerful and faithful to the tone of the guitar.

We used the Bassman to try out the virtual Fuzz and Overdrive stompboxes. In this case, the Mustang does a rather good job even if you have to mind high frequencies, which can turn aggressive very quickly. However, the controls are there to solve the problem. We just regret the small number of stompbox simulations (Overdrive, fuzz and nothing else).

For the overdriven sound, we used the bridge pickup of our 335 with the British 60's, 70's and 80's models. Like the clean Fender amps models, these three amps are very complementary: any guitarist can find a tone he likes, from the very round British 70's to the sharp 80's model. The Supersonic also sounds very good if you want more distortion without going metal.

Let’s finish with the effects: they do a good job and will be helpful for certain guitar players. Certainly, the FX loop will allow you to use your favorite stompboxes, but these effects come in very handy when you don’t want to carry your whole setup everywhere with you.

The Mustang is a good deal considering its relatively low price and the sound possibilities it offers. However, we are missing a small looper (like on many competitor products), and also more distortion stompboxes. Also notice that making settings directly on the amp is not very practical and you’ll have to use the Fuse software to edit some parameters. The overall sound is quite convincing for a modeling amp in this price range ($600 for the head plus speaker cabinet): the clean models and the British amps sound great. Only the hi-gain sound is a bit less convincing as it is often the case with amps in this category. Add the high-quality footswitch provided and you get a comprehensive amp with a very good value for money.

Pros
Cons
About our reviews
Comments on this article (2)