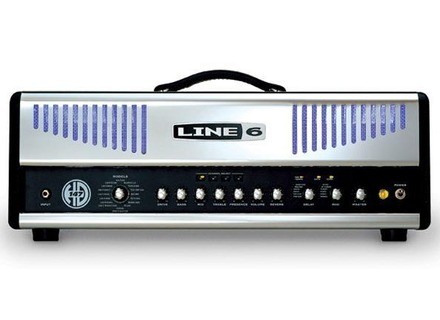 View other reviews for this product:
Line 6 has paved the way of modelers throughout the years, and it was only natural that they'd have some sort of head to go along with it. This amp features various amp models ranging from vintage to metal to the down right bizarre. It has different cab models you can choose from, the ability to run direct to FOH via an XLR connector, 300 watts of power, built in effects, MIDI, and a few more extra features hidden in there. That said, this amp is entirely solid state, and as a rule, I pretty much dislike 99% of solid state amps out there.

The amp itself is easy to you. There are tons of options you can choose from, and you can get a wide variety of different sounds. It's fully MIDI, so that's an awesome addition that should really be added to every amp. The manual is clear and explains everything in detail. If you have any troubles dialing in the amp, saving presets or whatever, the manual should be able to assist you easily.

The issue with the amp really comes here. There isn't really a good tone to be had here. The cleans aren't bad, but everyone knows that solid state cleans are nothing to brag about. Roland showed how to do solid state cleans decades ago, so pulling that off isn't anything special. High gain tones are still abysmal. They sound sterile and buzzy. What's worse is that it feels exactly like a modeler. It doesn't give like a normal tube amp, and it lacks the complexity a tube amp has.

If you're in the market for an SS amp, you're better off getting something like the Ampeg VH140C. In fact, that's about the only solid state amp I can actually recommend, unless you're just using something for a small practice amp. This amp sounds buzzy, the effects aren't anything that special, the cleans are decent, but it's just not something worth spending your money on.
Did you find this review helpful?yesno