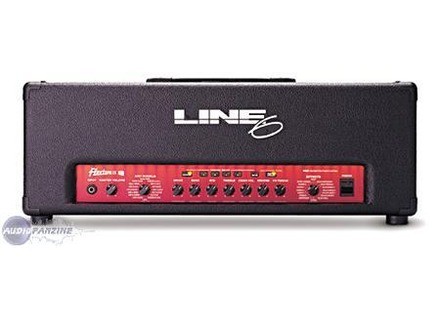 Value For Money : Excellent
View other reviews for this product:
Amp modlisation 2x125watt Stereo 8 Ohms.
between a jack on the front (two would MRIT)
Behind two XLR outputs symtriques, input-output jack symtriques send return between RJ45 for line 6 pdalier, MIDI In and Out
36 MODELS rpart amp 4 channel, simulator and HP mulitieffets Intgr.
The models of amplifiers are sneaks in and bites of ism, the sound palette is vast trs that we want to play Jazz on a Roland JC120 modlisation of rock or on the many Marshall available (including the famous Super Lead Plexi) or really Heavy on repro Mesa Dual Rectifier or Soldano SLO 100
The effects are trs good quality, with a MIDI pedal, this amp is perfect for scne without him adding 30 U of rack height.

The facade is simple it can not, there are sound hyper Rapidos on the other hand be careful if you change the volume of sound, for example, its clear to saturated under penalty of decline by 3 meters, especially if like me You connect to a 4 * 12, then be careful not to put the volume 5 or 6 to slam treble its ES 335 and switch to just Rectified APRS, less be in a stadium .... or can spend (not j'exagre)
the manual is clear trs, trs and well done, even if I did not open until twelve o'clock to attack the implmentation of the device.

I play everything but mostly rock and heavy, with a Soldano SLO and comprsseur + delay can have endless sustain a good level of saturation (my pickups are Seymour Duncan humbucker), if grows really drive the sound becomes trsmchant the 80's Metallica or Slayer, with September 1 by connecting cord or it can move in the same grind.
But I plug my guitar in and electro-acoustic with preset or Blackface + JC120 chorus and delay of the amplifier the sound is really beautiful trs, trs Christalin pure, worthy of the best acoustic amps lectros.
This amp is super versatile.

It's going to be ending for 10 months I have and I can not get enough, I sold it can be a Flextone III, or Vetta, but I must test it first.
Well apart from this problem of noise, nothing to say, recently I squenceur pilot with nothing to say works great for MIDI, my sounds on their own during the exchange squence, super convenient to record all at once.
The ratio quality price is right, even if it is not given even when (about 1700 the head and add another 600 for a 4 * 12 cabinet of good quality)
I have long hsit before taking an amp like this, because I swore by the lamps, I also cracked on a carvin head lamps trs rare and that sounded great but eventually the connection + for MIDI and the versatile sounds made my choice and this MODEL I do not regret my choice because it is really a bomb!
See the source
Did you find this review helpful?yesno
Cookies help us improve performance, enhance user experience and deliver our services. By using our services, you agree to our use of cookies. Find out more.