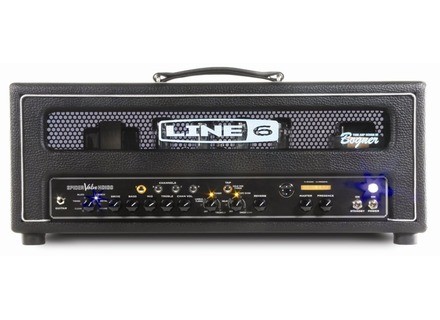 View other reviews for this product:
Line 6 has joined with Bogner in order to help boost their image as an amp company. They basically started from scratch, ditched the HD147 and started creating these hybrid tube amps. This amp features a 6L6 power tube section, two 12AX7 tubes, 12 different amp voicing modes, 7 different effects, built-in tuner, a bunch of programmable channels, the ability to go direct to FOH, and you can even plug in your POD to this thing.

They didn't do too bad of a job with this. Everything is laid out like a fairly normal tube amp, but you can also save certain presets and recall them for a later date. The head shell and head cab seem to be built fairly tough, but I can't attest as to how well they work on tour. I never played one, and if one breaks, I'm not sure how to go about fixing it due to there being tons of surface mounted components. I never read the manual to this thing, and I probably should have. There's a lot of small things going on in here that I didn't realize until afterwards. Thankfully, Line 6 has some nice manuals, so understanding everything shouldn't be a huge deal.

The sounds were decent, and I think a lot of that is thanks to Bogner more so than Line 6. The cleans are probably the best part of this amp, but I'm not one to brag about solid state cleans simply because good solid state cleans have been done for years. What really matters is when you start adding gain, and it's not too bad. You can get some nice overdriven Marshall-esque tones and even some Recto tones in here. The effects are alright, but they're nothing I'd consider too amazing.

If you're looking for an all-in-one head that does it all, this isn't a bad choice. However, I still miss the all analog tube path that so many other tube heads offer. The sound isn't bad, but there are definitely better amps out there. Then again, considering how cheap this is, it's pretty versatile...
Did you find this review helpful?yesno