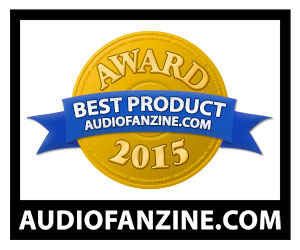 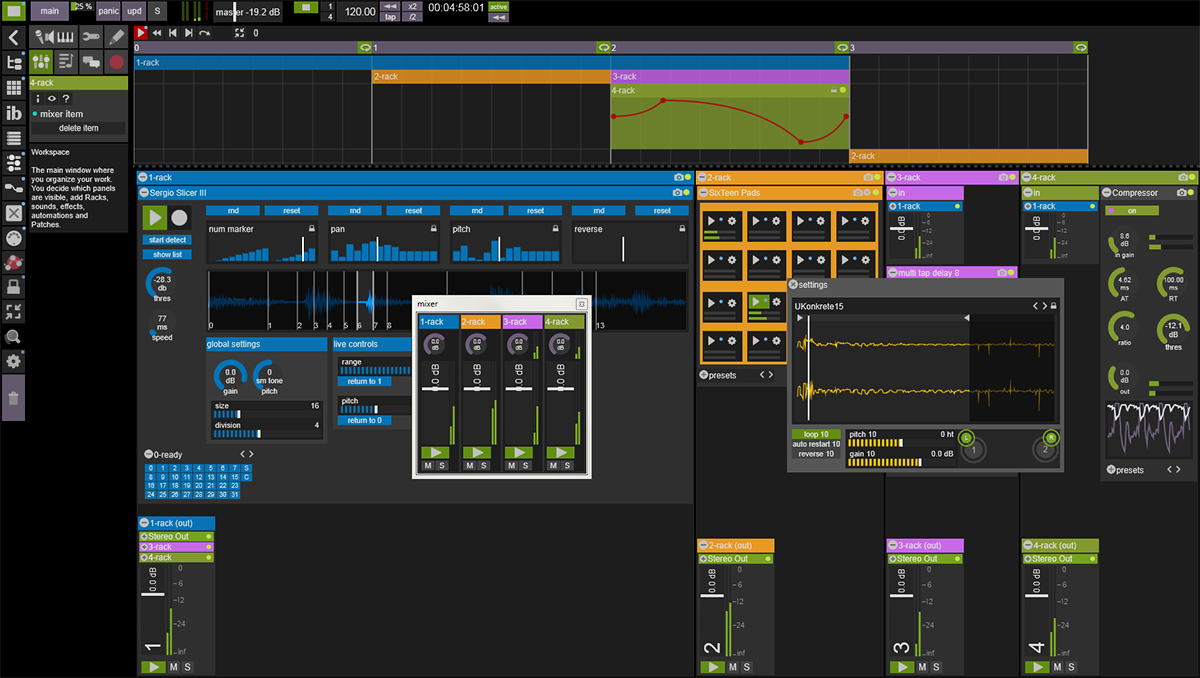 There are lots of software solutions for live performance. Strangely enough, Sensomusic's Usine Hollyhock II doesn't come up on the radar as often as other products. And yet...

Live performers have seen their instrumet options increase a lot in recent years — whether traditional, synthetic or electronic instruments. And while most are aimed at keyboard players, other musicians are also catered for: through e-drums or wind controllers like the EVI or EWI, and MIDI pickups for guitar/bass, like JamStik+. And even new designs that stray away from pre-existing conceptions in terms of instruments, like the Karlax, Audio Cubes, LinnStrument, Artiphon, and Oval. Or even interfaces like Leap Motion. There are plenty of solutions out there and they can respond both to MIDI and OSC, as well as to any gestures or movements you make.

But this is by no means limited to the transmitter alone, receivers have also evolved. By receiver I obviously mean the tool that produces the sound, be it via direct interaction, for a more or less unrestrained improvisation, or via a previous arrangement, in order to trigger/modify pre-existing audio, transform MIDI/OSC messages or capture/transform audio created by itself or other instruments. Ableton Live is obviously one of the first to come to mind, even if it has been evolving and now purports (not always with reason; take, for instance, its lousy management of latency and buses) to include mixing and post-production functions. Live is an excellent software for... live performances, which is already a lot. Sometimes it's better not to try so hard.

Bitwig Studio, a group of developers that used to work at Ableton, deserves a special mention, too. Its original workflow and possibilities in terms of virtual instruments make it a tough competitor for Live.

And what can I say about Apple's Mainstage, which sells for $29.99(!) and includes all Logic Pro instruments, effects and sound/loop libraries. All within a perfect environment to play keyboards, and which allows you to assign anything you like to a number of instruments and tracks limited only by the processing power of the host computer (and its RAM). Not to mention the possibility to process the audio coming in through the soundcard's inputs. It's not hard to imagine a Concert (grouping Patches and Sets, different preset hierarchies) where, for each song, you can adjust the instrument parameters for the keyboard player, the delays and reverbs for the vocalist, as well as amp simulations and effects pedals for the guitar and bass players. You could even add some sounds or sequences to the drummer's pads, while controlling everything in real time with the knobs and faders from one or several MIDI controllers.

Bizarrely enough, Sensonmusic's Usine isn't mentioned too often in this context. However, if you've ever been to an Olivier Sens concert, one of the creators (and instructor, and double-bass player, and pianist — in short, a major figure in the contemporary French jazz scene) of Usine, together with Yan Le Déan and Martin Fleurent, then you've seen first-hand how you can create and manipulate music with the software ─ and only recently with the Leap Motion controller — besides grasping the potential of the product that goes under the name of Usine Hollyhock II. The software wasn't created overnight. Actually, the first version, simply called Usine, was first launched in March 2006. V2 came out four months later and V3 one year afterwards. Then came V4 and V5, which hit the stores in 2010, and, finally, Usine Hollyhock premiered in December 2012. Version II saw the light of day in March this year. 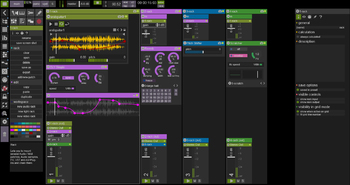 The software can be downloaded from Sensomusic's site. The installation is pretty straightforward (on Mac you simply need to move the program to the Applications folder). To authorize the software you need an activation key, a username and a password for the forums. The license is for a single user but you can install the software on up to five computers ─ thumbs up to the software maker for that. Although there is a small inconvenience, since you sometimes have to re-enter the codes for it to work.

In terms of compatibility, it works on Mac OS 10.7 (10.6 is not officially supported anymore) in 32-bit mode (for the time being, the 64-bit version ought to arrive soon), and on Windows Vista (Seven and 8, and also on XP, but without official support), both in 64- and 32-bit mode. There are several versions available: Pro (119€) and Addict (449€). The difference between them is that one offers lifetime free updates, direct support by the Sensomusic team, access to all future beta and preview versions, as well as a private forum.

Do note that Sensomusic is currently offering a special price of 69€ for the Pro and 249€ for the Addict version.

The software launches almost immediately after installation, giving you access to audio, MIDI and other settings via the gear icon. The number of parameters is impressive and they allow you to configure the software entirely at will, from the patches path to the color style, the size of the different buffers and the DMX/Art-Net assignation (yes, it supports light management), the network, video and OSC setup, the plug-ins, etc. 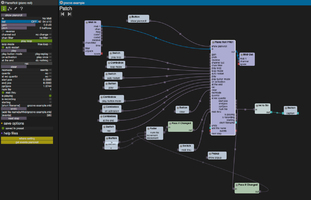 The software's architecture is pretty clear, since it's organized in modules. At the core is the Workspace, where you can organize the different racks and patches, sound production and audio/MIDI processing modules, browse the huge library included and the plug-ins installed on the host computer (you can specify up to four different folders in the Setup tab). The developers included a great number of pre-existing modules, but you also have a patch editor, which allows you to create your own instruments, effects and control tools, with a very similar approach to the one used by software tools like Max/MSP, Reaktor and, in a way, Tassman (for certain modules, and the list in obviously non-exhaustive).

You usually start with an empty workspace, although you can use one of the many templates and examples included to understand or take off from a pre-established starting point. The basic panels (a term used by the editor to refer to a group of controls, shortcuts and menus) include the Main menu on the left, which features icons associated to different functions; a Master panel on top to activate playback and manage the master volume; a Sync panel (both for internal and external syncing and with SMPTE display); a secondary menu, as well as a contextual menu (completed with a help panel) indicating command buttons related to the selected object. This workspace includes, by default, an empty Rack (the analogy to the real, hardware world is very fitting). 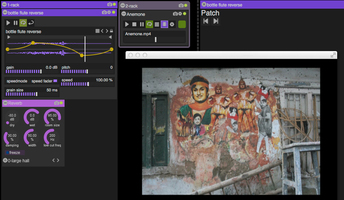 The rack can be either for audio (coming from the outside, from samplers and modules included by default, from any virtual instruments you own, etc.), light or video. Simply dragging and dropping a video object into the workspace or a video rack will integrate the video in Usine (as long as it's in a compatible format; I didn't test all of them, but I couldn't open .m4v, .flv nor even an old .mpg, for instance), triggering in sync with the transport controls. A small drawback is that, if the video has any audio, you won't be able to control it from within Usine, since there are no controls for audio objects within the video rack. A real pity.

When it comes to audio, an empty rack features an Input, a place for Patches (you can either load them or create them with a double-click) and an Output. The different input/output formats go from mono to surround (up to 22.2 and 64 channels). You can insert one of the multiple audio devices, some sort of quasi-instruments, including five samplers to choose from when you open an audio file (from a classic sampler without any resynthesis to another one featuring a granular engine, another one that responds to MIDI notes, etc.), Groove Machines, combining sample playback and a programming grid, and effects (delays, distortions, dynamics processors, EQ, and filters, transposition tools, freeze, pan, reverbs, ring modulators, scratch tools, and different effects sequencers). You can also integrate instruments and instruments/effects from the quite extensive Library (don't forget to download the Add-Ons made available regularly, there's even an Oblique Strategies module...), including Loopers, Grain, Pan galore, etc. 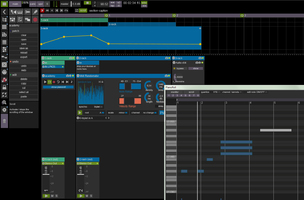 While Usine is definitely not a DAW, it offers quite a few MIDI tools, like a Piano Roll, a random event processor, pseudo-sequencers (which are incredibly inspiring), Patches conceived to be controlled with the Leap Motion controller, etc. You can obviously use AU or VST virtual instruments without a problem. And, at the same time that you can manipulate a sound or loop like with a Theremin, you can improvise with more traditional sounds, too, all while processing incoming audio events. The routing possibilities are child's play: the easiest way to go is to grab a rack and route it into the input of another rack.

And the cherry on the cake is the Grid that the developer included: A sequencer that allows you to place all the racks in a grid, determine the playback and loop conditions with a series of settings for fades, syncing and, especially, very comprehensive automation, including Patch and Rack parameters. In short, Usine is not really a DAW, but it can surely handle pretty complex sequences while allowing you to modify the parameters of Patches live, as they are gradually triggered.

It's obviously impossible to mention everything that Usine Hollyhock II can do. The manual will answer some of the remaining open questions. At this point, it wouldn't make any sense for me to create any audio clips, so here's one of the many performances by Olivier Sens using Usine. But you must definitely catch him live.

Usine Hollyhock is impressive, in every sense of the word. First of all, because it provides so many functions that it takes quite some time to master. You can obviously just settle for a "superficial" work, given the ease-of-use of its modular design, with the Racks and Patches you can combine in the Workspace, and control it live or via the Grid and the automations and other niceties the latter provides.

But if you want to get the best out of it, integrating light and video, you really need to dig into the software. And that's another aspect where Usine is impressive, if you consider its multiple possibilities and how hard it can be to find it at fault. There are obviously things that could be improved: The animations with the mouse (highlighting the function being hovered on) are too fast, which sometimes makes you doubt whether you are actually where you want to click or not. Plus, there is the impossibility to mute the audio of a video and the fact that it's only 32 bit on Mac OS X (even if the developer says the 64-bit version will be available this year).

The few times I still get up on stage, I use a Rhodes and a MIDI keyboard, all connected to a Mac and an iPad, processing everything with different effects. Mainstage is my tool of choice for this due to its MIDI assignation possibilities. But triggering loops and sequences is obviously a bit complicated. For what it's worth: When I started reviewing Usine Hollyhock II, I tried everything that came to my mind in terms of configuration. I did this to try to answer several questions regarding its performance live, especially when approaching things from a different perspective than that of a traditional keyboard player (with my Leap Motion controller). After just one week of testing, I bought a license.