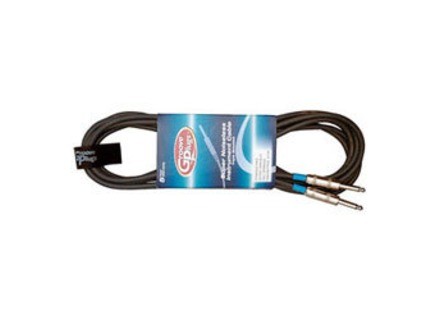 Groove Plugs’ Silver Match Series Instrument Cable is a simple ¼” cable that can be used in any situation you might need it. I’ve got one of these and I use it for my guitar rig. The one that I have is ten feet long. Not much to say about it’s characteristics other than it’s a silver tip cable and isn’t made of the best quality. I use this as a back up, as I’ve got a number of Planet Waves cables and others that I used primarily. Having said this, the cable does the job just fine in a practice or live setting. It wouldn’t be my first choice of a cable in any situation, and especially not for recording, but I’d be fine with using it if I didn’t have anything else to work with. Groove Plugs is a company that has cables that I’ve used since I started playing guitar, and I believe that this company is owned by Sam Ash if I’m not mistaken. For those who don’t know, Sam Ash is a store like Guitar Center that is based primarily in New York. You’re probably not going to find too many cables that are cheaper than this one, so if you want a cheap cable or two for your primarily or back up cables, these aren’t a bad way to go. I’ve had a couple of them over the years, and now I’ve just got one as they do break over time. That’s really the only downfall of these cables as they aren’t the most reliable that you can buy, but for the price that’s generally what you’re going to get. I’m not sure that you’d be able to buy these in too many places, but even if you could they wouldn’t be my first recommendation even in this price range. Even so, the Groove Plugs Silver Match Series Instrument Cables are adequate instrument cables if you’re looking for some on the lower end of the spectrum…
Did you find this review helpful?yesno
Cookies help us improve performance, enhance user experience and deliver our services. By using our services, you agree to our use of cookies. Find out more.