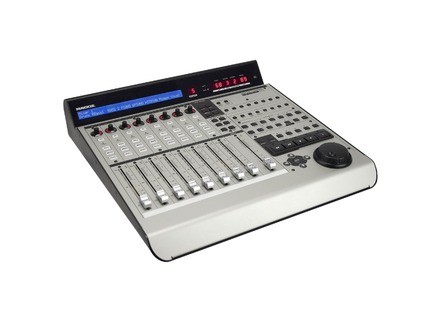 used in post-production studio video for 9 months, and completed two of its extensions, I find this very disappointing MCUpro!

First, the faders are terribly noisy (the calibration sequence at startup is scary)!
Mix in music, still happening, but mix "sound image", it is imperative to disable the engines of the faders to avoid being constantly bothered by their purring (which sometimes occur even when they do not move ...)

Then, after three months, a power supply broke down (connected to UPS / RFI)!

Then last month, after only eight months of almost daily use (8 hours per day on average), the MIDI block is broken down, making the delirious MCUpro and two extensions, and making everything perfectly useless !
Fortunately repaired by Mackie (in China, where I live) in 4 days!

The jog wheel, in turn, is rather imprecise for my taste, with jumps of Frame and involuntary step backwards rather annoying!

The composer I work with uses the old MCU for about 3 years and never had any trouble with (and the faders are much less noisy)!

I do not do it again this election, although in this price range, it remains without major competitors!

Small update after just over a year of use:
Two faders down the last two weeks, each for the same reason: to drive over the fader out of its guides and badly tangled (and this during the calibration sequence fader start) too difficult for me to repair without tools adapted. I do not use it yet very few of the faders, almost never actually ... I am extremely careful with the equipment I use and the machine does not move the workstation that was designed for her.
See the source
Did you find this review helpful?yesno
Cookies help us improve performance, enhance user experience and deliver our services. By using our services, you agree to our use of cookies. Find out more.