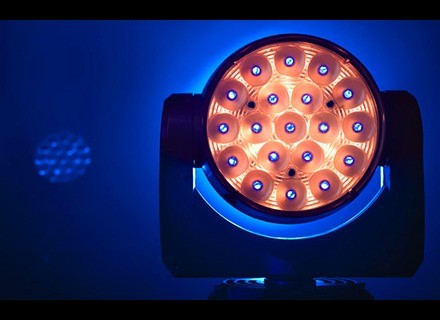 The Martin Professional MAC Aura is an LED moving head wash light with zoom that offers aura effects plus functions as a single-lens wash with pre-mixed color.

You can use the fixture as a single-lens wash or employ a separate set of individually controllable multicolor LEDs for "eye-candy" looks. You can mix, match, and create new effects that take the unnatural LED look out of LED lighting, according to Martin. You can use the Aura’s built-in FX engine to create effects.

The MAC Aura houses a 11-58° zoom for beam effects. The zoom is capable of angling wide or tight for beam looks. The MAC Aura is designed to deliver almost 4000 lumens of output in a 5.6 kg (12.3 lb) package. The MAC Aura is a wash light featuring color mixing with a range of shades from two independent color systems.

Its power consumption (1 amp) allows multiple fixtures to be daisy-chained on the same power line.