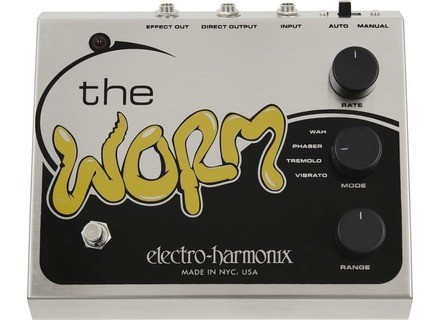 Worm, Multi-effect or other modulation effect from Electro-Harmonix in the Worm series.

Value For Money : Excellent
View other reviews for this product:
PDAL makes New York, robust design, unchanged for over thirty years at Electro Harmonix. The case is metal.

The PDAL has the advantage of offering four types of analog modulation (hot sound!)
The Wah mode is excellent, it provides absolutely dessonorits gniales and out of the mix for solos or riffs overheating!
The method reminds the legendary Phaser pedals "Small Stone" of the same manufacturer. Cool!
Tremolo mode is a nice tremolo Vintage

Vibrato mode has a fawn efficiently an amp to sound like the 60s, old Fender or Vox, for example ....

The pedals are nickel sounds of Radiohead, Stereophonics, U2, etc ...

4 pedals in one, with the effects of good quality and sound is a typ 10.

VINTAGE respecting its essence, the rglages are-simple, and large knobs allow manipulation of the foot (for scne cool!)

A SETTING THE RPM, a button switch to select between 4 modes, and SETTING THE Range / intensity of the effect.

A modulation switch Manual or Automatic (hint: position on Automatic)

Analog effects bring their share of heat. Do not expect clean cold numrique. Here is the sound from the seventies, a little dirty, but so hot Rock 'n Roll.

There are still some Sufi as the effects of what had at first. So, I went back to the store to try other models. Well, all that trmolos jai test blow as much or more. This is NORMAL!

I play the pedals with a custom tlcaster, a US Stratocaster and a Les Paul, Marshall DSL connects to a 401. No problem, a ring with the three configurations.

I put a 9, because there are better (but three times as much just for a tremolo ...)

I used a friend's for a few months, then I DCID buy one.

The Wah mode is compelling for its incisive one coming out of the mix and is Vintage wow!
I use the tremolo a lot, which is essential for me.

I tried Boss TR2, Line 6 Tap Tremolo, Dunlop Tremolo, and Voodoo. The WORM seemed most INTERESTED. Several effects of quality on a single pedals for the price of a Boss!
The ratio quality price is excellent. And Electro Harmonix possde an identity sound I love.

I chose the WORM, and I do not regret it!
See the source
Did you find this review helpful?yesno
Cookies help us improve performance, enhance user experience and deliver our services. By using our services, you agree to our use of cookies. Find out more.