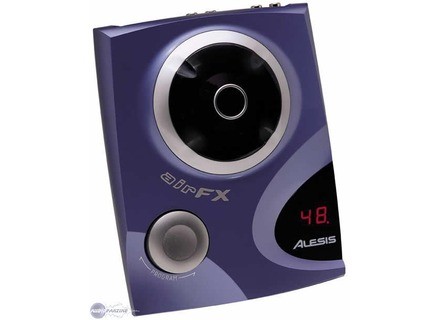 View other reviews for this product:
The AirFX has a wide enough variety of effects: spéparés into 5 groups: a special FX, Filters, Flange / Phase, special FX 2, Synth patch. Indeed, they are very interesting effects, standards, such as pitch and distortion, and other more personal AirFX to the flange and phase are numerous, and the synth patch (independent sounds) are more significant, but if you have the perspective to imitate a scratch or make an analog wave, pay you a synth or a turntable, because on this side of the AirFX is ridiculous. (Perhaps the AirSynth better, but personally I doubt it). A total of 50 effects. It&#39;s amazing how this machine is paradoxical: it&#39;s all digital inside, it has a super high tech appearance, but its interface is only analog (2 RCA RCA OUT IN 2), and above it a huge failure : a simple entry for the adapter, not at all secure adapter that has a very short cable. Not at all practical. This is not a rack model, but there is a little more original that it can be screwed onto a microphone stand.

Well then the time of disillusionment came: even if some effects of airFX have a rather personal side to the machine, they are few to be really interesting, some, because control of quite random, as the vocoder (c MIDI programming without even bother to think about it) can not find their place in this machine. Then I have to say that I regret the absence of reverb, delay, etc ... No such effect. For the beginner who will use this machine for the first time, we find it quickly and it&#39;s great fun at first (sculpt sounds blah blah), but it&#39;s quite a machine Obselete: a less than be a fan of body language, the sound produced by the effects of this machine is very random, and missing a lot of depth. In fact, I talk about body language, because if we can start to peter the fact because of the wind (white noise with a filter cutoff above wholesale) just by waving his hand, it quickly becomes ridiculous gesticulating at any time.

Good talk about the current as well. But what bullshit: a cable too short, a secure connection at all, and no ON / OFF !!!!!!!! it will then disconnect the cable behind that like all the cables will quickly going to slip behind the table just to annoy you. So not only is not practical, but it&#39;s bad for the machine when in fact even if one does not hand over the AirFX is bypassed, it is still connected to your sound, and a sudden disconnection it will be cut sharply, and it will issue a horrible kind of noise, a wave with a big attack, which is a pitch down, just like the cry of an animal that is dying ...

Note that a parameter can block (freeze) by pressing the button selection is essential in some effect, but it is well to say we will never be two times the same effect ...

I must say that this machine does not produce too many blows, if it is in bypass has good sound ^ ^
As far as effects are bland, some are certainly original, but worth every penny not to invest in if we need it as its unique multi purpose. It&#39;s a fun gadget for the scene, if you are not too afraid of ridicule.
It did not used primarily with audio directly to a micro instrument for example, on stage, as the effects are difficult parameters, even lowering the level of the console (by lowering the level of the channel or the microphone is with the insert in AirFX, once the air bypass FX level is too low) you will end up with bad feedback. It can be used on a synth, it would be best in a DJ kit, to filter and set effects in the original mix, or else with a sampler, but do not have more ambition than that.

I rather like the effects named: percolator, Frankenstein&#39;s lab, and other small new effects, also was quick to recognize them in a song when used.

I use it for 2 years, a fact I have rarely used in 2 years since I had another multi purpose, and it has really become Obselete.
I love the originality of certain effects, and the fact that you can just awesome sound (which is more a marketing than truth)
I blame the AirFX a machine to be oversimplified. Its creators wanted to give a simple and ergonomic use easily accessible, but having forgotten details like an ON / OFF button is unforgivable.
I did not have before that the effects, and must say I was really disappointed when I realized what a true multi purpose hardware, it has nothing to do with this toy.

The quality / price ratio now used, it would be worth, but hey we should really want to buy it.

Note that for 200 euros new, there are almost the same effect in multi Alesis, but it is on them, the reverb and delay, and is controlled on three parameters such as air FX, only 3 buttons that sounds, it is much more accurate than 3-axis infrared. The name of this product is INEKO.
For 300 euros there is a rackmount version multi effect from Alesis, the Akira, who in the same spirit as the previous two is not very pro, but is better than AirFX I assure you.
See the source
Did you find this review helpful?yesno
Cookies help us improve performance, enhance user experience and deliver our services. By using our services, you agree to our use of cookies. Find out more.