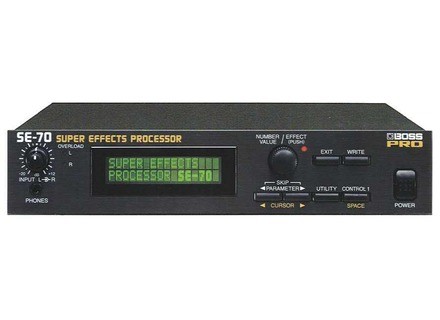 There was a rack extension to make it at the time of its release but I think it drags more
too much money to shop.

WARNING: slight lag of a third of a second when you switch from one program to another before the effect starts running ... sometimes it's boring ...

No need to spend hours in the manual (as often elsewhere) ... The grip is super simple.
Once you understand that chaining effects are pre-configured in banks 100 to 127, you take over the head to want to delay your disto after your ...
Clearly, the SE has a range of effects chained .. you can not change the chaining (just activate or not the effect) ...
But hey, it's soon 9 years I use this stuff and I have not had to things that were not preconfigured in it.

For against all effects are customizable. Rather finely and elsewhere. I will not go into details ... But you can finely manage your settings.
obviously, you can save your settings in 100 possible programs.

Like all multi effects ... the sound is generally satisfactory in terms of super price ... except ...
I give you a thousand ... the Distos ...
however, the Boss has Pacquet offering a dozen different disto ... amp simulations with ...
That said, I do not consider whether a Tarre the SE but Tarre multi effects ... and I find the OS on the same ground as his brothers is doing not too bad.

There are also some oddities in the coupling of certain effects that are most interesting ...

I use it for 9 years.
early to vote on stage effects (compressor / limiter / de-esser).
now as multi effect guitar (except the distortion that I took the marshall

The value for money I think is excellent.
A yes! clarification, after 9 years of transbahutages moult in concerts, chutte amps and other vile and sneaky moves that are referenced in the Geneva Convention, the beast still works without problems ... I have not tried it yet but as Bass Drum calle it's solid ...

A small animal that has made me good and loyal service over the life ... and continues to do so
See the source
Did you find this review helpful?yesno