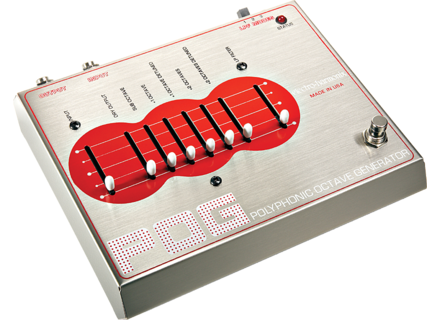 View other reviews for this product:
Polyphonic octave generator, all in the name.
Otherwise it is a pedals, all that is more commonplace, one input and one output jack.

Gnrale configuration is simple and Reduces the manual that is clear.
Quickly found his happiness, I use it both as organ Octave, has had its effect on the solos with a fuzz derrire.

The effects are pluttraliste, trs I fear the gadget and really did infact its effect on scne. The sound is of good quality trs just take the time to rgler and especially to place it among the other effects.

I've had six months.
What I like most is its versatility, it's the least we can do nothing rgler foot.

It is a PDAL coteuse but well, I use it a lot and it is an integral part of my tracks so I can do without.
See the source
Did you find this review helpful?yesno
Cookies help us improve performance, enhance user experience and deliver our services. By using our services, you agree to our use of cookies. Find out more.