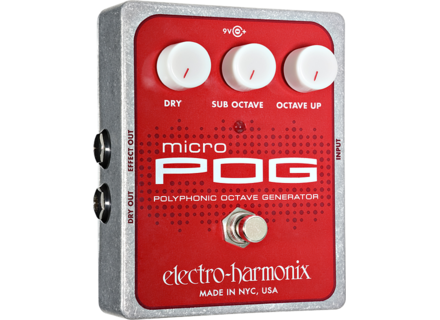 Micro POG, Octaver/Harmonizer/Whammy from Electro-Harmonix in the POG series.

« A bit overpriced but still nice »
4

Buy this productView price information >
View other reviews for this product:
Advertised as a 12 string emulator and polyphonic generator but it's more of an octaver and all around crazy sound generator. Let it be known right now, if you want and Octaver go buy an Octaver. This is a different beast altogether. While the general layout is very much like an octave pedal, the effect itself is a lot more broad sonically speaking. It's a digital pedal as far as I can tell. Has dry and wet outputs which I suppose is a good feature to have. Has a wet dry knob and separate switches for up and down octaves. All in all not that complicated of a pedal.

To be honest I did not plan on buying this. I received it in a trade for a pedal of near the same value. I am a bit of a pedal collector and having never previously tried the micro pog I decided to give it a shot. Like most of the Electro Harmonic stuff it feels very solid and seems reliable. Battery installation is kind of a pain but if you don't leave it on for hours that shouldn't be a problem. I really don't have any complaints about the configuration. Knobs are simple. No issues.

This is where words become limited in how I can describe what you hear from this pedal. First of all, I think a lot of players use this pedal for the more traditional 12 string emulation feature, and while I'm not really into that sort of thing, I can attest that the 12 string sounds are pretty darn good. I'm impressed with the accuracy coming out of this small pedal. Usually 12 string emulations sound fake at best, but this one is decent at least. Even believable.
The octave sounds are also pretty good. Nothing I haven't heard before. Be aware that you won't get any bass sounds because the low octave only goes down once. So no bass sounds. The really interesting sounds come out when you mess with the blend knob. You can get some triple octave stuff going on which is great.

Honestly I was expecting more. At the end of the day this is a really fancy octave pedal with blend options. I'm not knocking it for that. It's actually one of the better octave pedals I've used and definitely the most flexible octave pedal of this footprint I've found. But for $200 I think I should get more. I suppose the sound quality is what I'm paying for here.
Did you find this review helpful?yesno