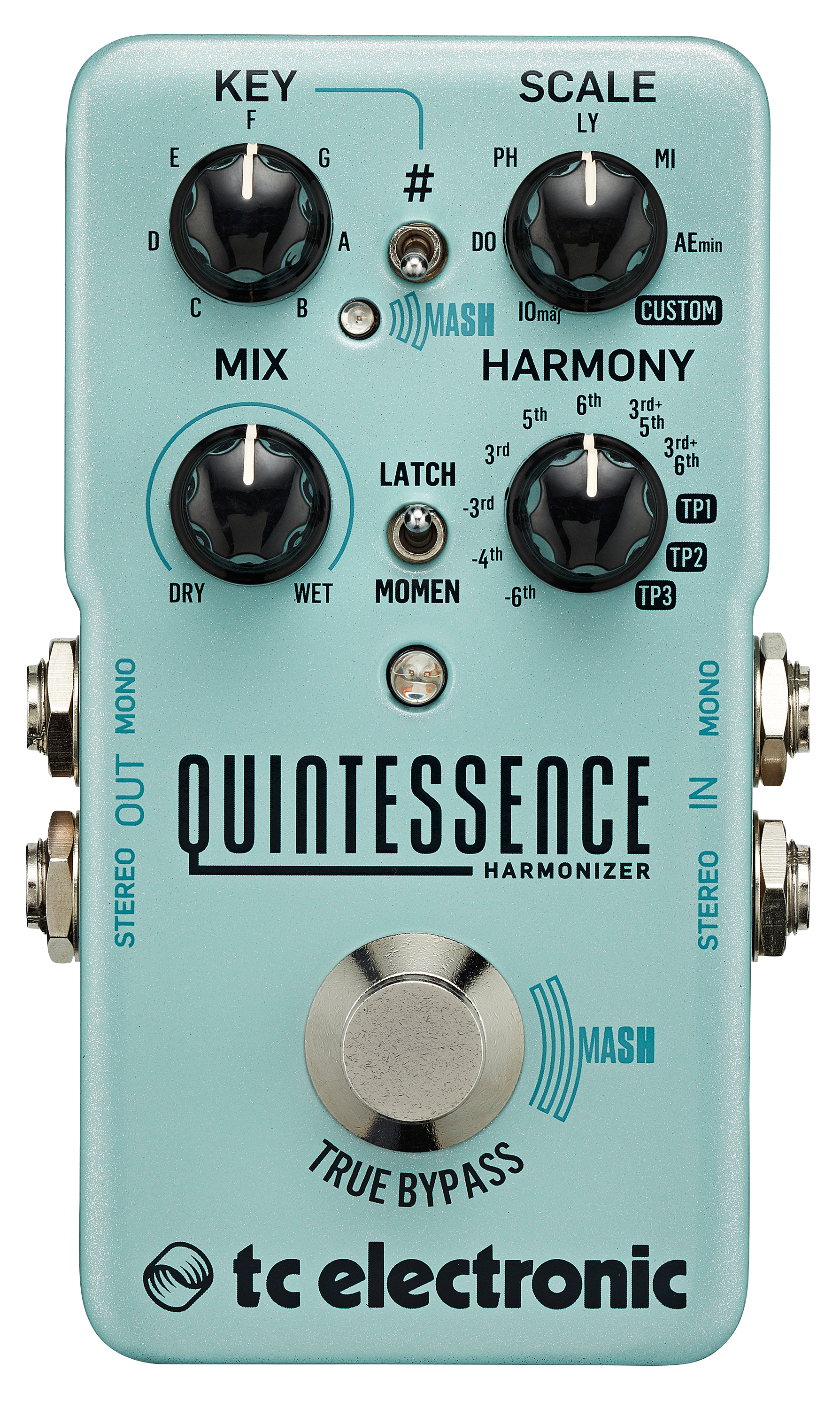 Publié le 02/23/18 à 09:54
Value For Money : Excellent
Audience: Advanced Users
SOUND:
Some pedals tend to get you more excited than others. The Quintessence Harmonizer is one of those pedals. Not only can it give your tone that added touch, thickness and dimension, as though playing with another guitarist, but TC Electronic did an excellent job in its tracking technology. Other harmonizers that work this well and sound this good cost a lot more (are more bulky on the pedalboard) and often involve scrolling through digital screens – Quintessence operates with knobs and switches. Below is a YouTube demo of how this pedal works, followed by examples (starting at 2:15 in the video) for its use with various scales/modes.

The Quintessence merely replicates whatever note or notes you play (it’s polyphonic, by the way) – if you play clean you will hear harmonized clean and if you play distorted, then the harmonized note is distorted. Now, the best way to explain what happens with harmonization is to consider a basic two-finger power chord – this likely is one of the first things we learn as guitarists, placing the index finger on the thickest string (any fret position) and another finger (often the ring finger) on the next string below and two frets up. As we crank out some riffs up and down the fret board, and on those two strings with that spacing, we unwittingly play a root (the thickest string) and a fifth (next string down). For example, if the main (root) note on the top string is A then on the next string down and two frets over we have E… the FIFTH of the root.

And so, in essence, what the Quintessence allows you to do is select what KEY you are in… what SCALE you’re playing over and what HARMONIZING note you want to match, whether it’s the 5th, a 4th or a 3rd + 5th combination, etc. Again, the video above provides sound samples that explain far better than written words; there are several lead examples, as well as how the pedal can be incorporated with rock rhythm and bar/power chords.
There are other features to this pedal. First, there is a CUSTOM position under Scale. By default this is the Locrian mode; however, you are able to visit the TC Electronic website and upload (via USB or Smartphone) a different scale, e.g., Lydian Dominant or Whole Tone. Second, under Harmony there is TP1, TP2 AND TP3 (these stand for Tone Prints 1, 2 and 3); those presets are configured to produce one octave below and one octave above harmony (they all are the same), but again you are able to upload custom Tone Print harmonies. The third function is called MASH, which allows you to vary a linked effect parameter when you press down continuously on the footswitch and with variable pressure. This too can be customized, but it is set to ‘bend’ a note upward (whether a half-stop or a full stop depends on the note and what scale you are playing); the last part of the video demonstrates how this works, giving some very nice and authentic pedal steel guitar sounds.

A very cool function is that the Quintessence can operate in stereo. This allows you to have a line out for the actual note being played (an analog-dry-through signal path so your note remains unaffected) and a different line out for the harmonized note. Of course, you can operate in mono and both the played note and harmonized note blend. The stereo out is very useful when recording, as you may wish to increase or decrease the volume of certain harmonized notes at different points in a composition – to provide emphasis or to downplay (or eliminate). Or for those who gig in stereo, you can have two different signals going to two different locations on stage.

OVERALL IMPRESSION:
Encased in steel, Quintessence Harmonizer is of steel construction and plastic knobs. The two toggle switches are far removed from the stomp switch, and each are also protected between two knobs. The stomp switch is a ‘soft’ switch, in that it is used to toggle the pedal on and off, but also used to activate the MASH function (by holding it down). The standard 9v (100mA) power input is located at the back, and away from wandering feet (it also works on a 9v battery).

Although it is possible to apply the Quintessence throughout an entire song – either using the same or different settings (depending on Key, Scale and desired Harmonized note), where this pedal really shines is when you want to provide emphasis to your guitar playing, e.g., during a solo or part of a solo, chorus of a song, etc. In that regard, the Quintessence’s stomp switch can be set for Momentary (step on it when you want to harmonize) or Latched (keep it on until you decide to switch if off).

I’m also a fan of subtlety. I really like this pedal at about 40% MIX or slightly less, as the harmonized note is about the same volume or slightly less than the original note, which I find more complimentary rather than distracting. When used in this manner, you can even apply a harmonized note that is slightly dissonant, yet sounds supportive if turned just below a particular threshold (producing a slight drone effect and while fattening up a guitar’s original signal and tone).

EASE OF USE:
A person who will enjoy and make use of this pedal likely is not a beginner; it will be someone with a modest music theory background. Beginners who want to get a fatter guitar sound are better off looking at the Mimiq Doubler by TC Electronic, which merely replicates a guitar signal 1-3 additional times, e.g., multi-tracking. With Quintessence you need to know what key you are in and what scale you are using – at the very least some tweaking will help you figure it out, but I suspect doing so will intimidate and frustrate some beginner players. Likewise, you need to know what harmonizing note you can play over top a particular scale (some sound sweet while others are dissonant – a 4th may work fine, whereas a 6th sounds grating). The reason why this is important is that how any harmonizer TRACKS notes that are played and what the harmonizing note should be (whether selecting a 3rd, 4th, 5th, etc.) is based on the scale, and the scale’s relation to the root note. C Mixolydian, for example, has a Bluesy sound and it is different (it has a flattened or lowered 7th) when compared to C Ionian (major)… and so when playing harmonizing notes over C7 (which makes more musical sense than over a C Major chord when using the Mixolydian scale) Quintessence’s Harmonizing 5th over Mixolydian’s lowered 7th will be different than it is for a regular 7th in the Ionian scale. Again, some tweaking makes it clear what sounds good and what does not.

Regardless, if any of this seems confusing the group over at TC Electronic have provided a lot of excellent information on basic music theory and how to use the pedal accordingly. Below is the user manual to give you a better handle on its potential: