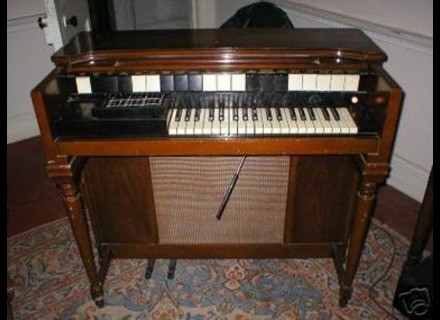 The Hammond S6 Chord Organ is a unique keyboard instrument that has a traditional keyboard as well as a section of chord buttons, like those found on an accordion. The keyboard itself spans about three octaves and has a unique knee lever for setting the volume. It has built in speakers and two bass pedals. There are a few different versions of the Hammond Chord Organ, although I'm not sure when these were made.

Using the Hammond S6 Chord Organ takes a little bit of getting used to, but since there isn't really all that much on here, most users will catch on rather quickly. As far as controls go, there are a series tone buttons for choosing different types of sounds. Basically, it has different organ, strings, and flute sounds. The chord section is it's own little thing, as it's got a button for virtually every type of chord. A manual probably isn't necessary, and it would probably be hard to locate anyway.

The sound heard from the Hammond S6 Chord Organ are definitely unique. This isn't going to give you any real traditional Hammond organ sounds, so don't expect that from it. It's kind of it's own animal, as if you can play the chord buttons and keyboard at the same time (which I can't), you can get sounds unlike other organs out there. In general the sounds are a bit cheesier and less defined, which can definitely work in some situations where a B3 wouldn't, and vice versa.

The studio that I work at has one of these Hammond S6 Chord Organs, but it doesn't get used very often and has almost become sort of a piece of furniture I'm sorry to say. It certainly looks cool sitting there, but the one we've got needs a little bit of work before it can be used for recording since it's so old. Even when it was working 100% is wasn't be used very much. While it's definitely got some cool sounds and features to offer, unless it's in your studio it's not really worth it to have around since it takes up so much space and isn't very flexible in what it can do. This having been said, what it can do is quite cool and is worth messing with if you ever get the chance...
Did you find this review helpful?yesno