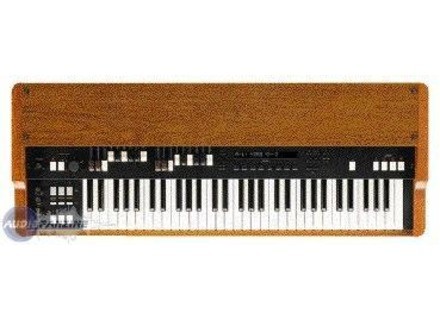 Value For Money : Poor
View other reviews for this product:
So it is a clone of Hammond as his alure indicates. 5 octave keyboard is really soft and spongy type Hammond, glissandos are a real rgal. The rponse is really good. TOC is the trio MIDI connections, a socket for the supplied expression pedals, two inputs for footswitch, Stereo output and must be all ... ah if a headphone jack on the front!
Otherwise the sounds they can not cover all styles of prs slow the sweetest rack and sulfur in the most furious Jon Lord! All is well on ditable in real time with two sets of nine drawbars for each keyboard part. The polyphony is total and Korg has provided an update of the OS that bring some changes which I will later.

Everything is arranged like a B-3 (or similar) then any port hand wheel Vibrato / Chorus really convenient. The manual, although I think can usefully correct.

Playing a lot of jazz / rock / blues sound that is kind of did what I wanted. The sounds are quite ralistes in all though a bit "lctroniques" for the very first version of the OS which does amlior in version 2. This version adds a new reverb, a speaker simulator, two speeds for the wheel brake, and the possibility of lowering the outbreak of the key to a more or less rapid rponse. The sounds are generally round and fairly original Fidler.

I use it for a year and a half and I am fully satisfied, especially since I put the OS 2, I feel like another instrument under your fingers ... What I like about this instrument is touch and sound round, what I like least is its distortion can be a bit garish and 17 kgs. In the era I had the choice between the Vk-7 Roland sonait lctronique too cold and my taste, the Hammond XK-2 far too expensive for me, the XB-1 Hammond always identical the XK-2 without the wood finish and keyboard synth not top. I chose the CX-3. I find the quality price ratio trs interresting for the type of instrument. Now if I had the choice again I would do even if probably a robin appeared, the Nord Electro, but I do not like the concept of zippers diodes.
See the source
Did you find this review helpful?yesno
Cookies help us improve performance, enhance user experience and deliver our services. By using our services, you agree to our use of cookies. Find out more.