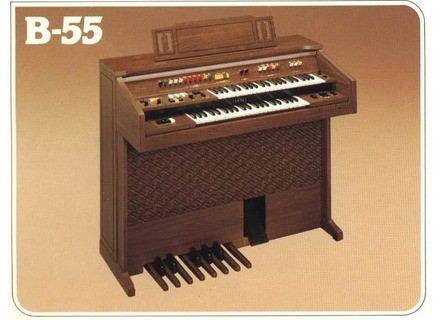 Electone B55, Organ from Yamaha in the Electone series.

It is an organ in the pure spirit analogue belonging to the series "Electone" and dates from 1981.
it has two keyboards and pedals shifted more bass.
Designed to work like this: pedals: bass, keyboard at the bottom (left hand): accompanying keyboard from the top (right hand): Melody
the dashboard is pretty clear, no sub menus (hehe), which only pulls knobs that are used to assay a particular instrument.
if not for some others (the "special presets" these are push buttons)
assayable effects at will! => Spring reverb, tremolo / vibrato and delay (big reverb)
Note: a volume pedal, and headphone outputs and line
There is also a section drum machine with 12 presets I think (waltz, march, jazz rock, samba ...)

the whole is very solid and quite heavy, wooden ... type veneer not very nice, the buttons are colored plastic and there is also a roll cover to protect the entire keyboard

There's no easier to implement
it thickens a bit to understand the combinations of buttons that work with color codes associated with a screen and thus provide two functions for buttons ... not clear at first, but you'll quickly get the hang of this mode "shift" of the time
edition of the sounds is the child: one dose each instrument, the dose and the reverb and tremolo forward Guingamp
after obviously must have used to move the feet and hands ... it's not my case

The sounds are quite old-fashioned without a doubt, the brass is bad enough, the guitar banjo, I do not even speak ... nevertheless it is possible to obtain an organ sound ok, not good but okay. The vibraphone is pretty good himself.
you can get sounds pretty funny sometimes, especially with the "wah brass"
for the rhythm section, nothing very modern, but the tempo is variable knobs, you can choose the method of support and measure the beats accompanying
it sounds very analog, it's pretty cool

I use it for a week, I finally taps quickly what a joke
I love the most ... it is a beautiful object, solid, intuitive, where to look for his little sound, I like playing with an organ sound and resume musette standards or tubes André Rieu with a friend for fun .. .

but hey, it's the favorite that made me buy it, not that it was departing I wanted y'en had two sales in a depot: 60 euros each! (The other was a Fe60!)
when I came back there was that there
good deal nonetheless
See the source
Did you find this review helpful?yesno
Cookies help us improve performance, enhance user experience and deliver our services. By using our services, you agree to our use of cookies. Find out more.