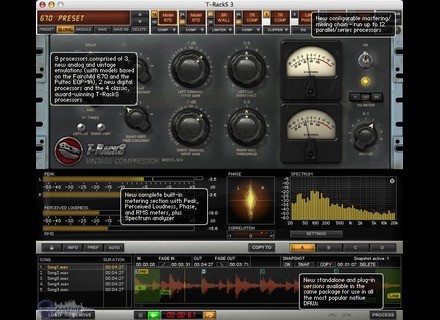 T-RackS 3, Other effects bundle or multi-effect from IK Multimedia in the T-Racks series.

IK Multimedia hasannounced the worldwide tour of T-RackS 3 Master Classes, a series of free clinics and workshops designed to give musicians the knowledge and tools they need to discover their product.

The T-RackS 3 Master Class series will be held in select locations throughout the United States, Europe and Japan. There is no admission/entry fee charged for these clinics, but space is limited so early registration is recommended.

According to IK Multimedia, in these clinics, attendees will learn "how to set up signal chains for every situation in T-RackS 3, how to properly use each module, the basics of mastering EQ and compression/limiting, plus hear the results on their own demo recordings. They¹ll also learn mastering tips and tricks from the industry pros, and how they achieved their most famous tones. Each clinic will be a very interactive and intimate experience; providing the chance for musicians to gain insight and knowledge from their peers and industry pros in a relaxed, comfortable and familiar setting."

Musicians wishing to attend a T-RackS 3 Master Class should visit the IK website to reserve space in the following locations, (with more locations to be announced):