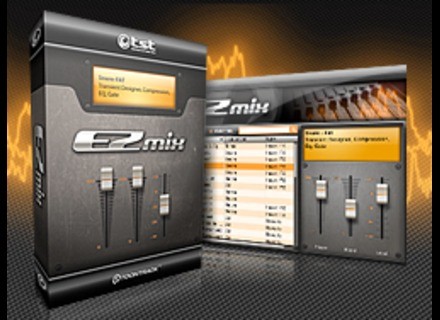 EZmix, Other effects bundle or multi-effect from Toontrack in the EZ Mix series.

Product replaced by the Toontrack EZmix 2.

View other reviews for this product:
EZMix is a very simple program. And that is where Toon Track has put the appeal. The program works entirely on presets, and if you read many of my other reviews, you will know that I gush over things like this. That's because no matter how experienced anyone is, there is always benefit in jumping 80 to 90% of the way to what you want quickly so you can focus more on the musical elements of your production.

EZMix is just about the least heavy plugin in the universe. It is very snappy and the workflow is very simple when you just want to play around. The program never becomes to sluggish for your creative juices to flow.

EZMix is not a professional tool. The first two words of the program name give that away. However, I think that anyone starting out should give this program a start because the presets will allow anyone inexperienced to get a feel for the mixing process. That is because the plugin presets detail exactly what is going into the mix, and the faders on the program allow the users to essentially turn the individual parts up and down. Considering that most people who buy this program are not familiar with the intricacies of mixing, EZMix becomes a fantastic educational tool.

You can also get a rough estimate of what you want very quickly, and reference from there, tweaking along the way. What I like to do is put EZMix into a tracks insets along with plugins that do the same thing. For example, if I had EZMix set to a preset I like that includes a compressor and some sort of reverb, I will have compression and reverb in the track, and alternate between these plugins and EZMix, try to get a similar sound, then tweak them the rest of the way.

EZMix is not a tweaking program; it just is not capable of that kind of complexity, but it is a fantastic reference program for those looking to get a sound in a mix so they do not lose track of the vision in the middle of the project.
Did you find this review helpful?yesno
Cookies help us improve performance, enhance user experience and deliver our services. By using our services, you agree to our use of cookies. Find out more.