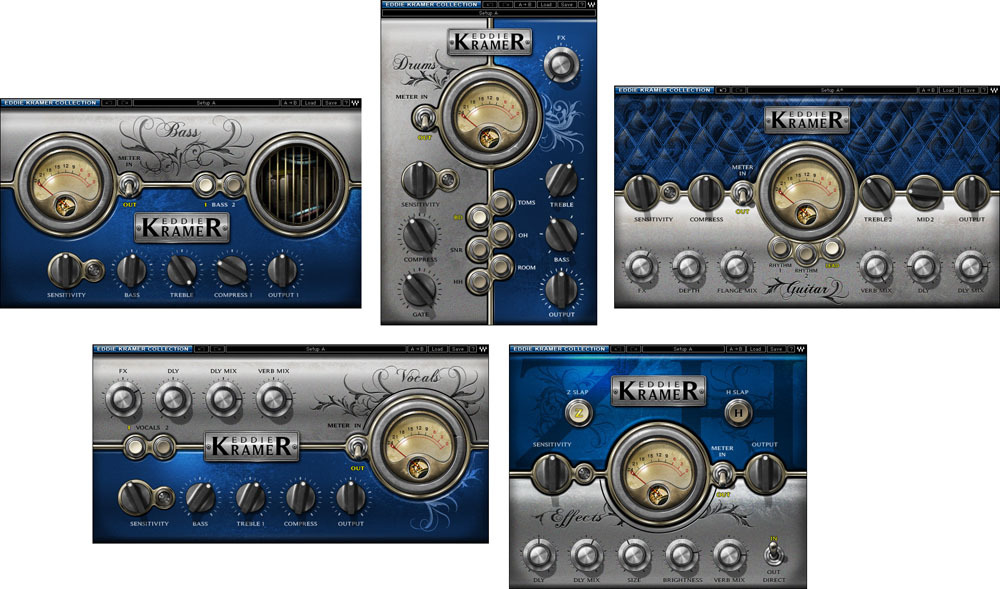 Other effects bundle or multi-effect from Waves belonging to the Eddie Kramer series.

moosers
Publié le 01/10/11 à 11:48
The Waves Ltd. Eddie Kramer Collection is a set of five high quality plug-ins for a variety of applications. For those who don't know, Eddie Kramer is the masterful recording engineer who did most of the Led Zeppelin and Jimi Hendrix - not too bad a resume if you ask me. I don't know exactly what his involvement was with making these plug-ins, but obviously he's at least lent his seal of approval to these. The five plug-ins included in the bundle are Eddie Kramer Vocal Channel, Bass Channel, Guitar Channel, Drum Channel, and Effects Channel, obviously covering all of the main applications for a modern rock band. The Eddie Kramer HLS Channel and PIE compressor are also under his name, but NOT included in this bundle. It should be easy enough to install the bundle at once, a well as to learn how to use the plug-ins as they all share a similar make up and feel. They all have pretty general parameters and provide you with a number of different processors in one. I've never seen a manual for the bundle...

At home I'm running the Waves Ltd. Eddie Kramer Collection in my Pro Tools 9 based system. I've also used the plug-ins at the professional studio that I work at on our Pro Tools HD systems, as I do a lot of crossing back and forth between home and these studios. My home studio has a Digi 002R and a MacBookPro computer with 4 GB of RAM and a 2.2 Ghz Intel Core 2 Duo processor. Since these are specific application plug-ins, generally I'll only run a single instance of one at a time, although the Effects Channel is usually a different story. Of course I've never had an issue on the Pro Tools HD systems at the studio I work at, but also haven't ever had a problem with these at home...

The Waves Ltd. Eddie Kramer Collection is definitely one of my top two Artist Collection bundles that Waves has to offer (along with the Chris Lord-Alge Collection). I find these plug-ins to be a lot less digital and harsh sounding than most plug-ins out there, and nice for thickening up a bass or drum sound as well as for bringing out vocals or getting a plethora of effects all in one stop. Usually I use individual processors for true mixing, but if I'm looking to get a quick and easy sound, the plug-ins in the Eddie Kramer Collection are perfect. The bundle isn't very expensive for the Native version, but isn't the cheapest either as we are dealing with Waves here. If you are indeed interested in these, I'd recommend checking out the demos although I definitely think you'll like what you hear.
01