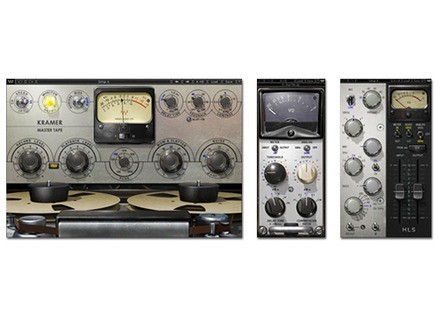 Together, they recreate Eddie’s "golden audio chain," which he used to record musical icons like Jimi Hendrix, Led Zeppelin, and The Beatles. It bundles the three plug-ins together.

The Kramer Master Tape plugin is modeled on a vintage 1/4" reel-to-reel machine. With adjustable tape speed, bias, flux, wow & flutter, and noise parameters, the Kramer Master Tape is designed to provide control over the contours of your sound. And to top it off, They've also added a slap & feedback delay suited for rock, dance, dub...

The HLS Channel was modeled on a Helios mixing console like the one used in London’s Olympic Studios. In addition to modeling the Helios EQs with saturation, low-frequency boost, it is designed to feature the behavior, coloration and drive of the console’s preamps. HLS Channel features a VU meter designed to recreate the look and feel of the original.

The PIE Compressor was modeled on a vintage Pye compressor. The Waves PIE plugin features a modeled VU meter designed to recreate the accuracy, sensitivity, and behavior of a physical analog meter.

For more, check out this link.