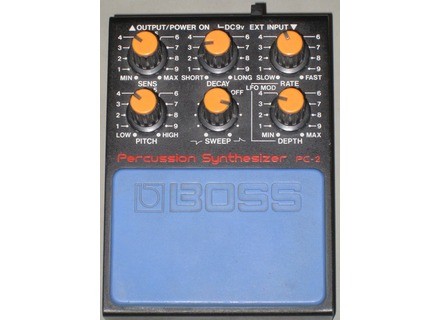 IT agtd a PDAL of the beginning of the 80 initially cre drummers for Disco dsireux add sound electronic (analog moreover) the drum set . It is Composed of a CSA sensitive to play on the stick, but also a trigger input (via jack 6.35), allowing it to be played by using a squenceur oldschool (TR-808 for example)
CT Connect, therefore, a trigger input and an audio output jack also in 6.35. A jack for external power supply.
Ct's, we can do a lot of little things like Bongo, Cowbell, Bass Drum little (I said "small", do not expect to reproduce the comics, let alone 808 909)
This bbte excels especially in Bliiiips bliiips slightly acid notament thanks thanks a LFO which reaches even when the 400 Hertz
A knob is rgler the sensitivity of PAD when playing the stick.
A knob is used to adjust the pitch of the oscillator (triangle wave only) 85 Hz 3 Khertz
A knob is rgler the DECAY of the pitch envelope
A knob is rgler rate this envelope (positive as ngatif)
The last 2 knobs are respectively rgler speed and rate of the LFO
Note that the LFO modulates the pitch of the oscillator

Six knobs that is not very complicated ...
The manual five pages, everything is there.

Electronic sounds are compltement, ralistes not at all, and all the better.
The LFO which starts in frquences audio, I love.
The strike force raction m 'has the good air, but I'm not drummer either ...

I use it recently (1 week to be prcis)
The report qualitprix is ​​not trs good because of its rarity. It takes on average 100 euros after on Ebay. Otherwise we find especially in England so if you have the opportunity to do the flea markets down ...
Despite the price I would do without this choice hsiter.
See the source
Did you find this review helpful?yesno
Cookies help us improve performance, enhance user experience and deliver our services. By using our services, you agree to our use of cookies. Find out more.