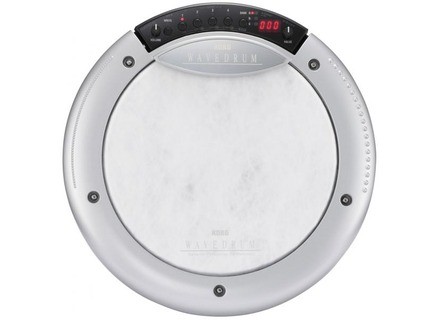 WaveDrum, Other Electronic Percussion from Korg in the WaveDrum series.

View other reviews for this product:
I have been using since July 2010 so a few months ago.
It must first understand it's a synthesizer, said synthesizer and therefore who says you can solve just about anything: sensitivity or speed typing, levels of algorithms (the algorithm is the program that generates a sound) and effects when two algorithms are associated with a skin and al ring can adjust the levels of one and other. You can adjust the size was, its depth, pitch, pan, you can put a reverb (there are several), a delay not too bad ... anyway we can fix everything.
So it's a synthesizer, percussion and ca ca makes it a unique instrument.
This means that instead of a keyboard, a tool most often used to trigger (s) sound (s) of a synth, it has a real skin and strapping as Korg calls the ring are the two main areas triggers a sound. Operation is simple: The Wavedrum has a cell (sensor) audio where his enormous sensibility (the Wavedrum would be much less sensitive if they had a cell noon instead) and the sound picked up by the cell passes by an algorithm (Trat digital signal by additive analog nonlinear Modelista and physical), in some cases even when the sound is filtered by an instrument pcm, then his one or two handsets arrives in the effects section ( reverb, delay, pan ...) and finally to the audio output mini-jack for headphones and two outputs for amp monojack, self-amplified speakers table .... or box mix effect (ca j have not yet tested .)
As already mentioned, the sensitivity is huge, in fact as sensitive as a real instrument as opposed to what has been said elsewhere, since the Wavedrum has a real skin and an audio sensor. We can obviously hit the skin, clacquer, caress, rub, smother strikes and Waved dott is more of a pressure sensor which can be used to modulate the sound or to trigger or both at the same time and this is like everything else configured.
The Wavedrum being unique we could not compare to anything else. I think it's a magical instrument and I am far from having been around for a little bit you put your hands in the Cambois because the factory settings the first listen may seem disappointing. It must first réler the skin tension and the pressure sensor that is done very simply using a key al awl came with the WD. Then we can already play a lot with the factory settings that can be restored at any time and very facilement.Voila why we should not hesitate to tweak the sounds, then re disrupt everything to his liking. Only like this we can discover the great possibilities of WD. The manual provided is pretty clear and not long to read and s address to a wide audience. No need to be sound engineer or pro synth to understand how to run the beast.
For my part I use it with an orientation electro sounds to create rather than imitate real instruments even if it is well suited to this use.
To work without emmmer ... neighbors are not what was best taken there.
Value for money: it can not be better I think: an entire set of percussion instruments plus a set of percussion sounds or electro a handy and 500 euros for me as a percussionist (I have a dozen at home and I have been much more) is the dream.
I do it again this election a bunch of times and also have j one wish is to buy a second ......


See the source
Did you find this review helpful?yesno
Cookies help us improve performance, enhance user experience and deliver our services. By using our services, you agree to our use of cookies. Find out more.