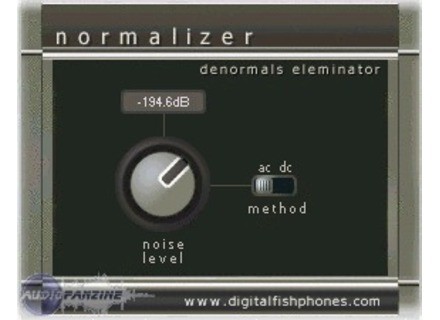 The Digital Fish Phones Normalizer is a free plug-in for Mac and PC operating systems. I think it’s only available in VST format, but I’m not 100% sure on this, although that’s the format I used it in. I don’t have it running anymore on my current Pro Tools rig. It’s been a little while since I installed and used the plug-in, but you can still download it on the Digital Fish Phones website and have it up and running fairly soon from now. The plug-in is designed for fixing a specific problem in your DAW where there is much processing power unnecessarily being taken up. I never really had the problem, but downloaded all of the DFP plug-ins and had it in my suite anyway. It couldn’t be easier to use, as it just gives you a threshold parameter to work with. There are two methods to choose from, although I don’t recall which I normally used and how they’ll affect your end result differently. I doubt a manual was put together for the Digital Fish Phones Normalizer plug-in, but the good news is that you won’t need one.

Ever since I made the switch from running Cubase on a PC to Pro Tools on a Mac, I haven’t had this plug-in on my home system. When I did, it was running on a Hewlett Packard Pavilion dv8000 Notebook that had 2 GB of RAM and a 3.0 Ghz processor. It fixed a specific issue that some audio hosts can have and helps you to save processing power, so if you have an issue it’s going to help in this department.

While not necessary for everyone to have, if you are having a denormilzation problem, it’s free and worth having. It’s not an effect or anything and is really just necessary by utility. I downloaded all of the Digital Fish Phones plug-ins for free right off the bat, and kept it in my system til I switched over to Pro Tools. If you aren’t have any problems in your DAW, you’re probably not going to need this, but for those who do, it’s nice that there’s a free plug-in out there to help fix the issue.