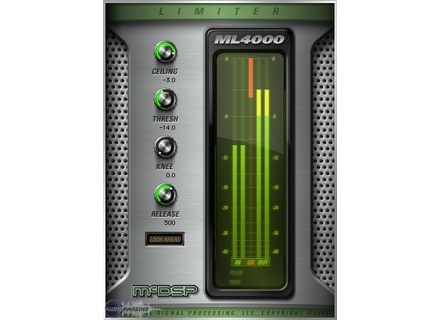 View other reviews for this product:
The McDSP ML4000 Mastering Limiter is a plug-in designed for use for mastering, but is also suitable for other limiting purposes.  After downloading the plug-in from Massey's website, which has an almost fully functional demo available for free, I had the plug-in running within a few minutes.  The only limitations that the demo has are that it will reset its parameters to default every time you re-open it and you can't save any of your settings.  You also can't bypass it, but the plug-in is cheap enough that it won't cost much to get the full version.

Since the McDSP ML4000 Mastering Limiter is indeed a mastering plug-in, I generally only use one of them on the mastering fader.  However, it doesn't take up too much processing power and if you wanted to use this for mixing I don't see why you wouldn't be able to run a few of them at once.  I am currently running the plug-in on a Mac Book Pro that has a 2.2 Ghz Intel Core 2 Duo processor and 4 GB of RAM.  I run the plug-in in Pro Tools LE 7.4, but have also ran the plug-in on a few different Pro Tools HD systems and it works great on all of them.

I really can't say a bad thing about the McDSP ML4000 Mastering Limiter.  I've been using it for a few years and really like everything about it - the sound quality, the ease of use, and of course the great price.  Even though the demo is great to have, to buy the plug-in doesn't cost much at all and it is nice to be able to save settings and bypass it.  For this price this is definitely the best mastering limiter plug-in that you can buy, and to me is one of the best deals out there.  Definitely go check out this plug-in and all of the plug-ins that McDSP has to offer as they sound incredible and are incredibly cheap!