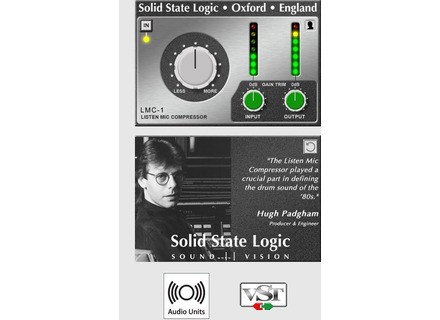 View other reviews for this product:
The SSL LMC-1 (listen mic compressor) is a free plug-in that emulates this portion from an SSL board that has become so popular.  I was able to download the software from the website and had it running in only a few minutes.  This can't be used in Pro Tools unless you have the VST to RTAS converter as it only comes in AU and VST for Mac.  Beyond this I didn't have any compatibility issues or any other real problems as the whole process went pretty smoothly and was pain free.  The interface of the software is quite easy to follow as it simply has a large knob for either less or more compression and input and output knobs.  It also has metering for both input and output.  I don't think that you need a manual for this plug-in and I'm not even sure if they make one because it is an online only product and is incredibly easy to use.

I've never had any problems running the plug-in within my configuration as it won't take up much processing power at all.  I am running the plug-in on a Mac Book Pro that has a 2.2 Ghz Intel Core 2 Duo processor and 4 GB of RAM.  While they don't have the plug-in for RTAS format, I do have the VST to RTAS wrapper that allows me to use this plug-in in Pro Tools, but without the wrapper you can't use this in Pro Tools.  I run Pro Tools with a Digi 002R audio interface and I can't say I've ever had any problems running this plug-in within this configuration.  Even if you don't have the best system, I don't think you'll have a problem with this one as it doesn't take up a lot of processing power.

I've had the SSL LMC-1 for a few months and I'm definitely a fan of this plug-in, mostly of course because it is free!  I don't use it all the time, but it definitely has a pretty cool sound and is unique.  It is great for cranking it up and getting some really cool overdrive sounds and since it is so easy to use, I never have a problem getting the sound that I want from it.  I can't complain at all about the SSL LMC-1 as it is free and is a pretty cool plug-in, however, I don't know if I would buy this plug-in if it wasn't free.  However, since it is free I would definitely recommend downloading it and trying it out for yourself now!