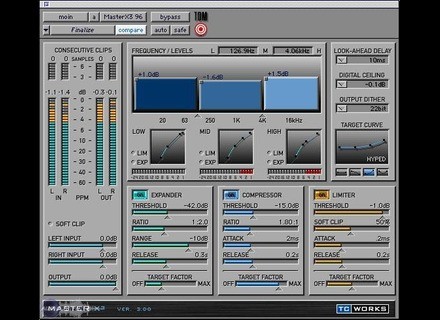 TC Electronic's Master X3 is mastering software, meant to be the virtual version of TC's popular Finalizer hardware. I don't have this plug-in on my own system, so I wasn't involved with installing it or anything that goes along with this. However, I've used it enough at the studio where I work to get a pretty good grasp on the interface. The processors at play here include a compressor, limiter, and expander, with it all split into three separate bands for more precise control when needed. It doesn't have any in depth equalization, but between these processors and the three bands you're able to do pretty much what you'd like with the sound. It's a lot like the hardware version of the Finalizer, but everything is more in one place here. The manual is probably a good idea for new users, but not completely necessary.

The studio I work at has a number of rooms on site, with all of them running the TC Electronic Master X3. It doesn't get used all the time since not too much in the box mastering goes on, but for demos and for rough mixes, it does see some action. I've mostly used the plug-in in our C room, which is Pro Tools HD based and runs on an Apple Power PC G5 that has 8.5 GB of RAM and dual 2.3 Ghz processors. This is more than enough to use this plug-in comfortably, especially considering you're only going to need to run one of these at a time.

TC Electronic's Master X3 is really nice to have around for quick mastering jobs, but to me isn't going to be the end all be all for in the box mastering. Having said this, it's quite effective for what it is as I don't believe that any all in one mastering software is enough to do a professional job. I will say that this is about as close as they come for having an all in one chain. It's not too cheap, so unless you're using it a lot it's probably not going to be worth it. However, if you know how to use it and your mixes are great, it can certainly do some good work for your and is definitely an option worth considering for professionals or high end amateurs...
Did you find this review helpful?yesno
Cookies help us improve performance, enhance user experience and deliver our services. By using our services, you agree to our use of cookies. Find out more.