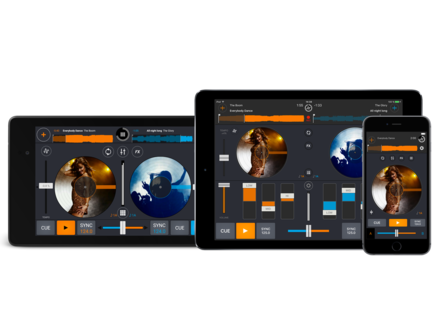 Version 3 involves great changes for Cross DJ on iOS as the app now features a brand new audio engine. Also, Cross DJ 3 is a universal app, which means a single licence is valid for all iOS devices (so users won't have to purchase the app more than once to use it on, say, both their iPhone and iPad).

Other new features of this iOS version of Cross DJ include :

As for the Android version, it includes support of multichannel audio on devices running Android Marshmallow

multichannel audio on devices running Android Marshmallow.
- Design improvement: a scroll bar has been added to the library, making navigation through the songs much easier. The U-Mix Control Pro 1&2, Pioneer DDJ-SB, DDJ-WeGO2 and DDJ-WeGO3 MIDI controllers are supported, and sync with keylock mode was enhanced while in the same time many bugs were fixed.

Depending on your device, version 3 of the Cross DJ app is available through the Appstore (Free and HD versions) or Google Play (Free and Pro versions). In both cases, price for the paid version is $4.99.