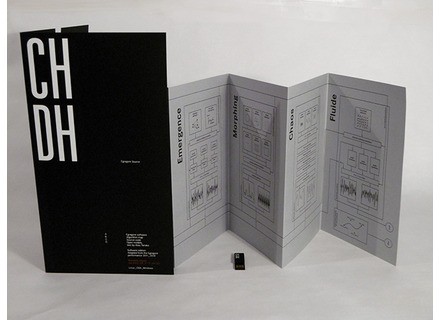 Friday’s Freeware: Egrégore for you and for all

This week’s freeware is not a plug-in but a genuine audiovisual experience developed by French collective chdh.

Behind the chdh collective are three geniuses, Cyrille Henry, Damien Henry and Nicolas Montgermont, who have been exploring for about 15 years the relationship with behavior, image and sound. They use Pure Data and its Gem sound library to create “audiovisual instruments”, including Egrégore and its Egrégore - source variation that we are introducing today.

Egrégore is an audiovisual performance project that was launched in 2011, which aims at exploring group movement phenomena generated and controlled by a computer and translated into abstract images and sounds.

The team is now offering a software edition, Egrégore - source, available for free download on Mac, Windows and Linux, and designed to document and archive the performance.

Concretely, 377 particules are controlled by 5 instruments (Mouches, Emergence, Chaos, Morphing and Fluide) mainly based on physical modeling and chaotic equation algorithms, each with different parameters, that you’ll use to create sounds and images. The movement results in the sum of movements generated by all the instruments. They play with the relationship between the particules, each use independent generators for each element, while other connect all the particules together.

You can use Egrégore - source for your own experimentations, but the icing on the cake is that you’ll have the opportunity to participate in a new Egrégore live performance that will be organized on May 27th online. chdh provides the source code with the software and the computers (you) will connect all together to the internet to assist and participate in the live performance played by chdh, by remotely control the patches.

If you’re interested in the project, you can download Egrégore - source at www.chdh.net/egregore_source.php and get prepared for the May 27th event.

Have a great experimental weekend!