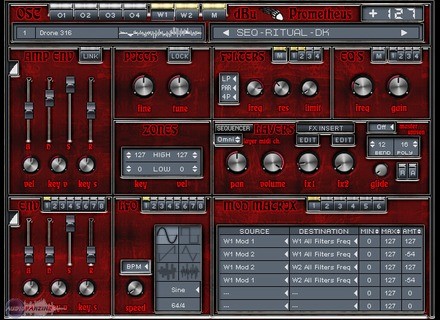 Prometheus, Other Virtual Synth from DBU.

Dangerous Bear Underground (DBU) has announced the recent release of its 2008 product line of soundware libraries and sample-based VST instruments.

Prometheus is a Windows VST instrument powered by the WusikEngine (currently version 4.2.4, with free updates as the Engine itself updates) with a soundset of 11.5 gigabytes of samples in both WusikSND and wav formats, and 1500 presets.

According to DBU, Prometheus includes pads, twisted synth fx, soundscapes and more. It is geared at composers and players looking for moody atmospherics, sci-fi soundtrack effects, and ambient textures.

Prometheus' synthesis features include six stereo, disk-streaming sample-playback layers, each including four (series or parallel) multimode filters, eq, insert effect and two effects sends. Two of these layers may be configured as wavesequencers, a feature allowing for step-sequencing of pitch, pan, sample played (from a list you create) and more. There's also a modulation matrix including as sources 8 ADSR envelopes and 8 multiwave LFOs, as well as vector synthesis via the x-y pad.

The price is $100, but users of other Dangerous Bear products may crossgrade for $80. You can read about Prometheus, hear audio demos, and download a free "lite" version on DBU's website.

We're told that Fortuity is the product of dBu's collaboration with HG Fortune, who custom-built the engine based on his STS-series transition synthesis technology. Fortuity is a Windows VSTi and includes 200 megabytes of samples in five SF2 banks, as well as five .fxb format preset banks. Price is $40.