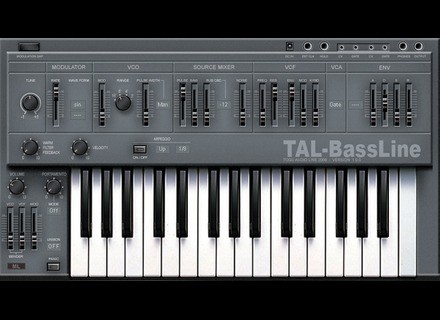 View other reviews for this product:
Togu Audio Line Bassline is a freeware VST that can be downloaded and installed in no time. The only reason that I tried the Togu Bassline VST is because it was free and I was over at KVR looking for some new Bass VST’s so I gave this one a shot. It is not perfect by any means , but it is very easy to use and you can get some great bass sounds when using it. There was no manual, and it is a pretty small VST so it wont take much of your CPU or RAM up using it.

I did have some issues when running it on my quad core pc running Windows 7 , my pc has 2.6GHz and 6MB, I have great computer specs , when running Togu Audio Line Bassline multiple times within the same session it would crash. This would only happen if I had it open like 4 or 5 times. Now you can easily work around that and not open it that many times. But I like for all of my basslines to be in different channels not just different patterns. So I would say the performance I am getting from Togu Basslines is about 50 percent, it could be a lot better and has room to grow. Togu has created a good baseline VST with a lot of room to get a lot better, I see a lot of potential for this VST in the future.

The thing I hate about it is, I cant run it more than 4 times without it crashing and me having to shut down the whole session and re-open the session just to hope that it doesn’t crash again. The thing I like best about it is that you can get some really good base sounds if you know what you are doing and take the time with which sounds you choose and how you mix it with your other instruments and drums.