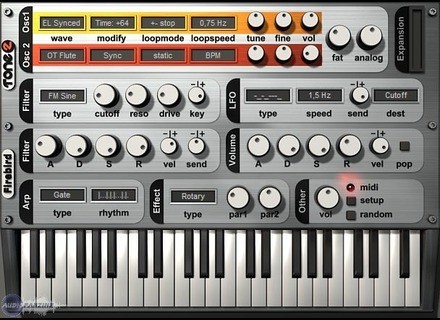 FireBird, Other Virtual Synth from Tone2.

« good synths for your productions »
4

View other reviews for this product:
Installing the Tone 2 Firebird was a quick process as it came installed when I installed my Steinberg Cubase SX software. I had no compatibility problems at all as the same manufacturer made both the soft synth and my sequencer. After installing the Cubase SX software the Firebird had already installed itself and was ready for use within a total of minutes. The interface of the Firebird may take a little while to figure out but this is only because there is so much to dive into. It has sections for two different oscillators, as well as a mixer section, a filter section, a chorus/flanger section, an LFO, a filter envelope, and an amplifier envelope. This allows for a ton of control over your tone and if this isn’t enough, there are a ton of different presets that always come in handy.

When I was running Cubase SX, as I now use Pro Tools LE I ran it and the Firebird on a Hewlett Packard lap top that has a 3.0 Ghz processor and 2 GB of RAM. With this set up I never had any problems running this software and while I would only run one at once, I’m assuming that is that amount that most people are using this, as it doesn’t make that much sense to have a bunch of these running at once. However, I don’t think that you would have too much trouble running a bunch of these soft synths at once as they run smoothly and stably.

I've been using the Firebird for about five years and I've found it to be an overall great sounding software synth. I love the presets that this has and I've used them a lot in addition to all of the different sections that this software offers. While there are some better and cleaner sounding software synths, the cheap price makes the Steinberg A1 a formidable option. Overall, highly recommended to those running a Steinberg sequencer who want a good sounding and cheap soft synth.