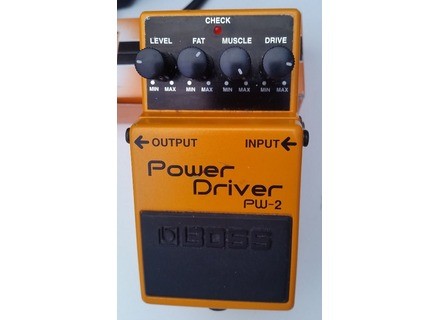 View other reviews for this product:
The Boss PW-2 Power Driver is a distortion and overdrive pedal designed for use with electric guitar. It has a 1/4 inch input and a 1/4 inch output and as powered by either of a nine volt power supply or battery. It isn't a rackable piece of gear as it is a stomp box.

Using the Boss PW-2 is a relatively easy thing to do as it only has four separate parameters to control different things. It has knobs for level, fat, muscle, and drive. While these parameters aren't named the traditional things that you would see them called, they are basic controls and after you play around with them a little bit you will understand exactly what everything does. There isn't too much to this pedal beyond this and for this reason the manual isn't a necessary thing to have.

The tone quality heard from the Boss PW-2 isn't all that impressive in my opinion. While it does have its moments and I do find it useful some of the times, I don't find enough uses for this pedal to be able to declare it a great sounding pedal. The overdrive is pretty full sounding, but I only find that it works in certain situations and isn't all that versatile of a guitar pedal. I have used this pedal with a Fender Stratocaster and a '76 Fender Twin Reverb amplifier, so I'm getting pretty accurate results of what this pedal truly sounds like. I do however like to use this pedal for harder rock as it I feel it works best for this type of music.

I've been using the Boss PW-2 Power Driver pedal for about a year and while it is a decent guitar pedal, I can't really say that I would recommend it to any professional. The price of this pedal makes it a very attractive option, and it will certainly work fine for begineers and even for intermediate players, but isn't up to par in terms of sound quality for professionals. There are other distortion and overdrive pedals out there for similar prices that I would rather use than this, including Boss' own DS-1. I would recommend checking on the Boss PW-2 on your own, but don't hold your expectations too high.