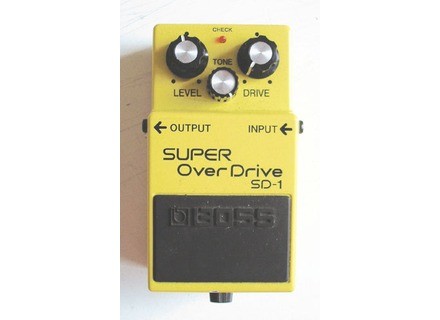 Childish, read the other opinion.

One of the earlier opinion of this pedal is a clone of the ibanez ts. It's not that simple. The special feature of this pedal, and one of its quality lies in its distortion of the signal system: the asymmetric clipping. The signal is distorted on half of its travel. So we keep an attack similar to the bypassed and we recognize the signal. This makes it the most transparent overdrive on the market. Ibanez tried to copy this system, but the patent was filed by Boss, so it's a proprietary technology, ibanez had to abandon plans to pedal asymmetric. Ts historically precedes and forms the basis of the SD scheme. But the asymmetrical clipping changes everything.
It's his real strength that makes me prefer by far to TS808/9/10 and the like. The signal is observed and the attack too. It does not color the sound, making it dry if the amp is not good output.
I use a Les Paul Junior, a telecaster and a deluxe fernandes deuce, all plugged into a Soldano. The sound is respected! I use it to boost parts or switch to lead, drive to the bottom level and mid level or race to the bottom and half way to drive depending on if I want more saturated or sustain an attack boosted a bit more . The tone is set once and for all a little above mid race, he actually plays on the saturated harmonic sustain.
It is quieter than a beaucopu ts, less loud, too, a more aggressive ts 808, more modern in sound, too, less gain than a TS9. It is equally suited to a rhythmic play a game lead, but less singing than ibanez.
I use this pedal with a battery, no power supply. Depending on the brand and the quality of the battery, the sound changes, of course, I recommend the batteries Danelectro stabilized, or at least good batteries, no battery salt that ruins the sound and attack significantly the level of output.
You can change this pedal for Keeley, précéent see a notice, or by transforming it into a true clone of TS in analogman.

For a fee of approximately 65 euros new, it is the ideal alternative to tinted blues overdrive. I would like to have a little more level to boost the sound level e out, but other than that it is perfect. His respect for the attack in fact an ultimate weapon, but it requires a good sound base. It does not sound, she just gives more saturation and amplitude of the sustain keeping the attack almost identical to its bypassed.
The bypass is very clean, the pedal is solid as any Boss pedals, the big knob to engage the effect is imanquable, it always comes to pass effect or remove it.
I quote throughout my opinion the ibanez because they are references. But the pedal itself are incredible, but a demand already osn original nickel.
After playing dry, with no effect for several years, s is currently the only pedal I have in my line up. I use low end, only Certan parties, but it does exactly what I expect of her.
If it again, I do it again. I tried before buying a large proportion of od on the market, from ibanez (808/9/9XL/7/10), other overdrive boss (OD1/3/BD) and pedals disto (mxr / boss / dod / etc etc).
I'm still trying regular pedals of this type to test new products and none for me, even though they are very good pedals.
I advise anyone who wants an overdrive that distorts their original signal and find the ibanez too pervasively present on the attack and the sound of the amp. Especially if the overdrive will act on an already saturated signal, in which case a single pedal that convinced me with the mxr Zakk Wylde has too much gain and Carl Martin overdrive.
I put 9 because I really want a little more output level if possible.
I add to finish off the bypass BOSS, although it is not what is called a "tru bypass," is remarkably transparent and reliable.
See the source
Did you find this review helpful?yesno
Cookies help us improve performance, enhance user experience and deliver our services. By using our services, you agree to our use of cookies. Find out more.