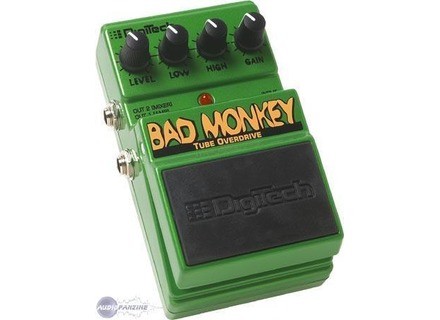 Bad Monkey, Overdrive pedal from DigiTech in the X series.

View other reviews for this product:
Low level high gain amp and two outputs and mix; a pedal on / off foot, you wonder what it is because I do not dyed, but I put a kick on the gain knob to go from zero-to three-quarters or bottom. I prfr used so that the switch has this function but with a little practice all goes well even on stage.
no true bypass is an advantage if you play live sound for the simulation of HP oprationnelle remains in the off position and can serve as a fuzz pedals up front if it is true that it affects the whole chain of effects and colors a little amp amplifier output as the level is slightly boost but does nothing because it's the cot gnre

Nothing more simple could not rule more than the gain level when we found severe acute balance and volume of output and this without too much volume Vairya general; over the volume of the guitar att Aiges the naked and saturation a bit like an amp on lamps (the name "tube overdrive" is not usurping)

Live console can leave your amp sends home a Vox AC30 type trsraliste with high mdiums well grimey TS808 or other blower tube, MXR + Disto in a Hot road (and yes I while also) and I added two come straight from the states a "V-Stack CLASSIC" that sends as much as a modern marshall directsono three bodies in the sound card or a guitar amp, and finally a "MENATONE top boost in a can" that turns any guitar amp vox AC30 with two channels (well over particularly my hot road) but unfortunately does not sound live sound. brief two pedals dpassent the $ 200 and I always play on my bad monkey live sound when I go to the circus in the clubs with my band

60 For it is not worth to put more than 200 in a TS808 reissue or other since all these boxes sound "garage" but there is only this one that a DI output so it to fly in and say that the Grail is perhaps dejas but mostly out for any occasion. I did stick a 9 parcequ'elle is ugly in his book factory, customization is required. do not try your bassist made mine myself adj throws a ... seems that reminds one a little ... old Ampeg bass player of all my fawn is as broke as rock n roll, a Fred Chichin in older and much steeper
See the source
Did you find this review helpful?yesno
Cookies help us improve performance, enhance user experience and deliver our services. By using our services, you agree to our use of cookies. Find out more.