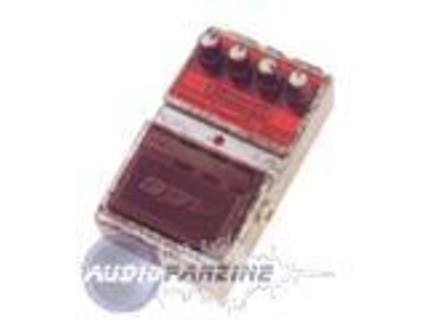 First of all, point out things right away: this is NOT a "distortion pedal-to-death-do-for-play-as-du-grindcore" ... Not!

This pedal is in fact, as the name does not indicate an Overdrive. Yes, yes, an overdrive on the edge of the Fuzz, but be careful! A "Rectified Overdrive" as specified in the statement under the name of the pedal. Side look, the pedal is heavy metal, and the sturdy footswitch well, especially compared to the first footswitch enough for the brand that got angry if we tired a bit above. In short, the look and sound really inspire confidence.

In terms of connectivity, it&#39;s very simple: input, output, and also an output jack called "Spkr out" that connects the pedal directly into the PA or recording without a direct box. Not bad!

Power is supplied either by the usual 9V battery (easily accessible without the need for screwdriver) or a transformer format BOSS (the outlet is located between the two output "out").

The knobs are nice to shoot, drive a little (just enough) to avoid inadvertently change a setting, if touched at the base.
The manual offers four examples of sound, but frankly, it&#39;s better to find oneself his own.

As I said, so it&#39;s an overdrive that we have here. Surprisingly with a name like that, right? But in fact, the name of the pedal is right: imagine a group of Grindcore typical style, with a super-low tunings, songs under 2 or 3 minutes and with his well-saturated and dripping drooling, deliberately not very precise (as is what this kind of style). Bingo! It is in the thick of it! Pedal complies with the type of microphones used on the guitar (single or double), but supports even more when the big humbuckers like "patator".

In use, and over time, note that certain frequencies were voluntarily traffiquées to get what&#39;s so special:
* The button RUMBLE, the bass is very present and very quickly become too invasive and round as if the speaker of an amp was too stuffed to serious. However, one can easily guess that this was deliberately done so.
* With the BURN button, the treble is very strident, at the edge of a jigsaw. But here too we guess that it was deliberately calibrated as well.

We also note that the buttons and FEAR RUMBLE complement each other perfectly, but still need some adjustments to push the buttons 3 / 4 of their races depending on what is sought as his. Reducing it to one of these settings will then be asked to review them all, which guarantees good sound research in general.
So, you end up with sounds not for the pedal: the juicy, dirty blues with a little RUMBLE pushed and half-BURN (remember that it is an overdrive at the base), punk BLAST with the button pushed too much, the noisy-grind, with all settings at bottom, the alternative with the BURN boosted and not too much RUMBLE, etc ... Really amazing!

Another surprise: the output Jack "SPKR OUT" which allows to connect a live sound or recording, without a direct box. When the pedal is not activated, the sound is not bad and quite transparent. Plugged into an amplifier, this release offers a different sound output jack on the other, which increases the possibility of sound findings. You can even use it to connect the sound of a bass.

Fills surprises other pedal will be connected upstream of the GRIND will also use this exit "SPKR OUT" ... Pretty neat huh?

Small problem: the sounds are usable, but it happens too fast to say that the pedal would have deserved much more output level, regardless of the output jack used. But it would have been of much less in <a rel="nofollow" href="/cable-by-the-meter/sommer-cable/the-spirit/?utm_source=audiofanzine&utm_medium=link&utm_campaign=netting&utm_content=product&utm_term=The+Spirit" target="_blank">the spirit</a> of sound from mission of this pedal and it will manage the volume on the guitar and the amp

When you want to take this pedal, there are questions to ask to see if it&#39;s worth it.

6 The good things that tip the scales in its favor:
- Perfect for the style Grindcore announced
- Very focused on the game rhythm
- Exit "SPKR OUT" to replace any direct box
- Being able to connect pedals ahead to enjoy the "SPKR OUT"
- It offers more versatility than expected with good surprises sounds (punk, noisy, alternative, blues and even the large well cradingue and gruff).
- A common and its really not very different from everything that exists, making it original.

Those who will not like this pedal will be those who:
- Looking for a distortion pedal (here is one that has boosted overdrive)
- Want the versatility of its saturated
- Swear by its very clean, precise and surgical
- Want to do solos audible
- Want a good output level
In short, without trying to priori!
See the source
Did you find this review helpful?yesno
Cookies help us improve performance, enhance user experience and deliver our services. By using our services, you agree to our use of cookies. Find out more.