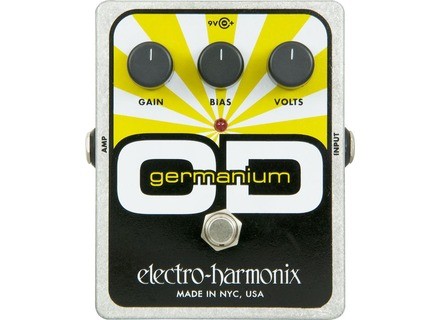 Buy this productView price information >
View other reviews for this product:
This is an overdrive which can control the dose of current that powers the germanium transistors which compose it, a bit like the old fuzz used with dead batteries, it changes the tone drastically. It's electro harmonix designed in a vintage-modern spirit, which has its strengths and weaknesses as discussed below. The keg is made of brushed metal and seems solid (unlike the big muff which tend to break at the switch, after seeing how it fits in time!).

Powered by 9v basic jack in, jack out, and roll youth!

Three knobs, it may seem simple, but here it is relatively complex. Gain rises gain, nothing too hard here. Volts and Bias knobs are the two which give the effect its originality, failing to give him the versatility! Bias could replace the tone knob a normal OD, although it does not act on the same sound settings (it does not darken the sound but rather lowers the harmonics) and volts changes the timbre of the distortion.

Note that it only works well (a little breath anyway, but at EHX this is common), but coupled with other effects is a bit poo, I do not know if it comes from my diet (with germanium transistors beware), or placement of the effect in my chain, but that shit in the glue. Volume we regret this pedal, and possibly also to push the volts instead of only lessen (I have a memory of a Fulltone OCD really changed depending on whether the patch fed by 9, 12 or 18v!)

So for those looking for a basic overdrive, go your way, other pedals will do much better than it, it is not his interest. It is interesting in the studio, or for noiseux of all kinds! It helps make the sound boiled to kill attacks and sustain, it must grope between volts bias and buttons, and find the sound you need. This is a pedal hackers after it seems complicated to me to have live, already because a germanium transistor fears temperature differences (sound also changes depending on the time), and because it is not affect the "basic", on the contrary it is very typical, and do not chain well, so hard to live.

Its great advantage is to provide worthy sounds boutique pedals at a much more attractive price.

I have not tested with a base or a keyboard, but it is possible that it works too, why not?

I kept a few months, it does not suit my musical universe, however it's still a good pedal I regret now that I regularly recorded in the studio. EHX surprises us again and again, and it feels good inside (under the portfolio if we want all the catalog!)
See the source
Did you find this review helpful?yesno
Cookies help us improve performance, enhance user experience and deliver our services. By using our services, you agree to our use of cookies. Find out more.