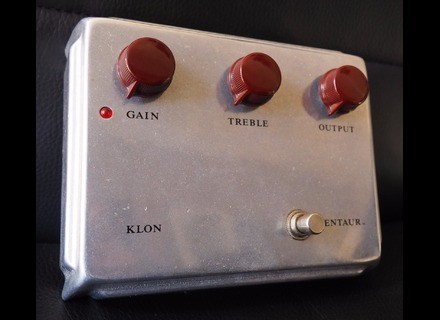 Product replaced by the Klon KTR.

View other reviews for this product:
This is a very popular distortion pedal by Klon, and it's the only product that they make, I'm pretty sure. It's not a fancy pedal, so no Midi Ins or outs, and no computer edits. It's totally analog and unfortunately isn't rackable.

The waiting list for this pedal has been about 7 years for a while now, unless it's gone up. When you play one, you'll know why. My band used one when we recorded our album, because our studio owners happened to own one. It's got a great tone that doesn't color the sound too far. When you're recording, and you want a tone that sounds like a Fender Twin being pushed really hard for great natural distortion, the actual ability to emulate that on record is a bit trickier sometimes. This pedal will certainly allow you to do that, as well as get even more kick out of it. I think that the pedals main selling point is its transparency, which is better than most pedals I've encountered (though I've read a few online diatribes that would disagree). It's not completely transparent though, which isn't too big a deal. I do think that the pedal is one of the better distortion pedals I've played, and I'm still waiting on one. I like the fact that you can really push this thing without it faltering, that is, it won't reach a point where it gets too harsh.

The sound is the only real reason to buy a pedal, in my opinion, and this sound is fantastic. The price is pretty expensive (about $400), so getting one is more of a long-term mission than a quick purchase. However, it's got a great reputation, and for good reason. It's pretty sweet. I've played countless distortions, and while I have many that I really like, this one is pretty unique. I would highly recommend it to a studio owner, or very serious guitarist who needs a great pedal.
Did you find this review helpful?yesno